The Cat That Changed America
By Tony Lee Moral
Review

As anyone of you who have followed Fiction Books before will know, I never generally read or feature children’s books.

However Tony Lee Moral is an author I have featured several times over the course of the past few years, highlighting the many outstanding books he has written for adults. So when he contacted me with details of The Cat That Changed America, his latest book directly aimed at the children’s market, a feature post was the least I could do to help promote the book.

I also now have a great-nephew who has recently started school, so this seemed like the perfect story to check out, for he and his mum to share as bedtime reading.

THE CAT THAT CHANGED AMERICA 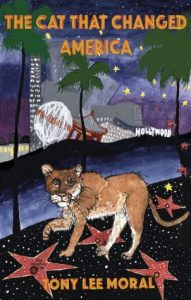 Based on a true story with an imaginative retelling for young readers.

P22 mountain lion is born in the beautiful Santa Monica Mountains outside Los Angeles, California.
But he is forced out of the mountains by Prime, a fierce older male lion who wants him dead.

He heads east to stake out a new territory of his own in the bright lights of the big city.
Along the way, he makes friends as well as enemies, and crosses two freeways, the 405 and 101.

He passes through the City of Stars at night, and strolls down the Hollywood Walk of Fame, all the while trying to avoid those bothersome humans.

After more adventures, he reaches the edges of Griffith Park. Can he make it his new home? 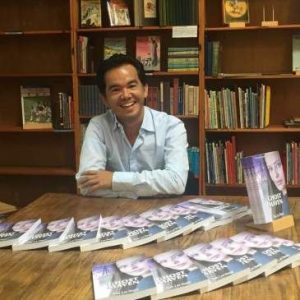 Tony was born in the historical town of Hastings, England.

The 1970s was an influential decade for Tony and his early inspirations were the natural world and cult cinema.

In the late 1980s he scored an early publishing success with the formation of his own software company for the booming home computer market.

Tony began the 1990s at the internationally renowned BBC Natural History Unit where he spent many formative years filming in remote places around the world from the Himalayas to the Amazonian rainforest. He moved to California in 1999 to work on the award winning The Shape of Life series and to write his book on Alfred Hitchcock.

Now a successful author, Tony still continues make an eclectic mix of bespoke documentaries and films around the world, now having established his own production company, Sabana Films.

“P22 opened his blue eyes and curiously looked around his new home. Everything seemed so big and exciting. Green leaves all around him. Trees and trees and even more trees!”

“Mama shook her head. ‘No, they don’t kill for food. They kill for sport and for the thrill of the chase’. P22 shuddered. He didn’t like the sound of them humans at all. Mama was teaching them to hunt, but also to respect all the animals that lived in the forest, as each had the right to live and share nature’s bounty. Why would you kill something if you didn’t eat it? P22 didn’t understand that at all”

That this story is based on true events, is part of what made the book such an attractive proposition for me to feature. And that Tony decided to pitch this version of the story at very young readers made it even more interesting, as this is quite a divergence from his usual genre and writing style.

The Cat That Changed America, brings to the forefront of those developing, sponge-like minds, the conservation issues of hunting animals purely for the thrill and chase, rather than any need or even desire for the food their prey provides. It highlights the way in which our adult greed for excitement and our human desire for expanding into every available space is driving some animals to starvation and extinction, whilst our constant need for ‘pest’ control, adds poisons in at the root of the food chain, which then work their way up to affect animals right the way at the top!

Then of course, whether we are a youngster of either the human or animal kind, there are the more lifelong lessons to be learned from the story, about how our parents raise and nurture us, preparing us for when it is time to leave our childhood home to discover an independent way of living and make our own mark on the world. How we should pay good attention to the lessons they try to teach us, as they only really want what is best for us. That we are all unique and different individuals, with some of us being eager to get going on our own, whilst others prefer the security of home and family for just that little bit longer! And of course, that not all families are conventional, however diversity is good and acceptable. There can ultimately be no price put on the value of friendships, no matter how ill-matched they may seem and we should never judge others by their appearance. Although almost all of us have to make important choices in life, with P22 choosing to have a place of his own with food enough to eat, over and above having friends and someone special to share his life with.

Tony has countered the serious issues raised by P22’s extraordinary journey, with a story that has some real heart and humour, which youngsters can relate to and engage with. The storyline is well constructed and leaves plenty of opportunity for imagination to play a part in the interpretation and understanding of events. The dialogue and narrative is crisp and plain speaking, well suited to its audience. The chapters detailing P22’s life up until the present day have been kept short, to keep those young minds engaged and focused – although perhaps there might have been a little mention made about his apparent loneliness without a mate to love and support him, just to highlight that we all need someone to be our special friend sometimes. However, that has been countered by the quirky friendships which P22 strikes up on his perilous journey, with each having been given names and personalities which would appeal to a young reader’s sense of fun and mischief.

A fun story, which tackles relationship and environmental issues, at a grass roots level.

The chapters are kept nice and short, with some lovely contemporary illustrations to head each one up, thanks to the lovely artwork of talented English illustrator, Louise Goves.

There is also an end page containing 10 easy to assimilate facts about mountain lions, which are sure to raise more questions from inquisitive little minds.

A PDF of this book for review purposes, was kindly gifted to me by the author.