I grabbed this lovely looking book, courtesy of my auto-approval status on NetGalley, provided by the great team at publisher, Aria Fiction 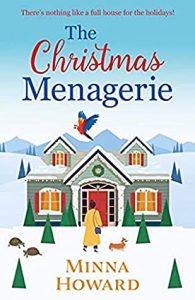 Amelia usually loves Christmas, but this year is her first one alone since her husband passed away – though she’s not quite by herself.

Somehow, she’s been lumbered with a menagerie of pets over the holidays, no thanks to the new village vet closing the local kennels.

Between a parrot, two tortoises and god-knows-how-many baby mice, Amelia ends up seeing a lot more of Jules the vet than she planned to.

And despite her neighbours’ fury for the man who shut down a local institution, she can’t help enjoying every moment she spends with Jules.

She tells herself it doesn’t really matter as surely Jules will be driven out of the village by this time next year. But as Amelia’s about to discover.. 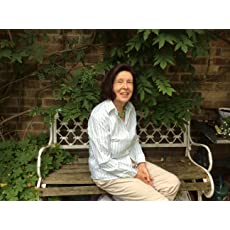 Minna trained as a fashion journalist in Paris, but she became a novelist instead.

She sometimes works as a film extra and meets so many interesting people who occasionally give her ideas for her novels.

She lives in London and has three children and two grandsons.

You can check out a complete list of Minna’s books here, the cover art alone will be sure to cheer you!

“So, the girls won’t be with you for Christmas? Well of course, Amelia, you’re welcome to come and stay with us… if you’ve nowhere better to go,’ Tania said, even though Amelia had not suggested it. ‘We can squeeze you in somewhere, though Pippa and Joe are here with the kids, Matt and his new girlfriend and my dreaded ma-in-law,’ Tania’s voice changed to one of doom, ‘with her latest man”

MEMORABLE MOMENTS FROM THE STORY

“Since Esmond had died, she’d been wary about ‘dating’. Having not done it for so long she was unsure what was expected. Two adults, well past their teenage years, could behave as promiscuously as they chose, only she wanted to have love in the mix of seduction, not just a cheap thrill. Was that asking too much?”

“Amelia thought it best not to ask if her engagement with Dom was over. She was wearing gloves, so she couldn’t see if Sophie was still wearing her engagement ring. If she did marry him, she would have to put up with his family, though perhaps if they stayed in Cornwall and she and Dom lived in London, she might not see much of them. But marriage, as she’d discovered when she married Esmond, was not just the love of two people who, left alone, might have a fair chance of living happily ever after together. Instead it meant having to put up with difficult members of their respective families, weaving upset and angst into their relationship”

“He might cause more embarrassment by trying to kiss her or something as they went to their cars. If only Esmond were here, she wouldn’t be in this predicament, and this wasn’t the first time it had happened. Some men seemed to think that they were doing her a favour by offering to sleep with her now she had lost her husband. She needed love, or anyway a warm relationship, for such an intimacy and though she liked David, she hardly knew him, and she did not want to be intimate with him”

“She’d geared herself up, all ready to fight him, expecting him to say there was no way the kennels could be started up again, but instead, he’d made it sound as if he had no concerns about it opening again, provided it was started from new. But who would pay for it? It was bound to be expensive and they’d have Jules breathing down their necks while it was being done. Though rumour had it that he was leaving the district, even though his son had just started in Mum’s school, which would be a very good thing, indeed”

It is quite widely known that I am not much of a ‘seasonal’ reader, so you will quite often find me reviewing Christmas books in the middle of summer and vice versa, so to actually get to this book read and reviewed on schedule is something of a novelty in itself!

The book has an opening which really throws you head first into some rather chaotic action, an eventful storyline which chugs along nicely with not too many surprises, and an ending which is hugely satisfying if predictable. But who doesn’t relish a bit of predictability in todays uncertain world, and especially at Christmas!

There are so many ‘cozy’ mysteries out there on the shelves with specific themes, that to find a ‘cozy’ romance with a strong emphasis on theme, is a whole new ball game for me! The Christmas Menagerie, is exactly what it says on the cover, a contemporary feel-good romance, with plenty of wildlife action for all you animal lovers out there.

Having no pets of my own, the thought of having this random, mini travelling pet shop, of various ill-matched animals and birds turn up on my doorstep completely unannounced, would really see me running for the hills. However Amelia, our reluctant, amateur pet-sitter, takes it all in her stride and copes with the situation as best she can, albeit with rather disorganised competence. It’s a good job that there is a friendly vet on standby though, just to help out with the couple of odd unforeseen incidents, which add some unscheduled humour and mayhem to the festive period! This new friendship is also potentially on course for a romance which will last way past Christmas, if only life, a rival for Jules’s affection, family and other people’s pets, just didn’t keep getting in the way!

Told largely from the perspective of Amelia herself, with just a few chapters added by her daughter Sophie, this book to escape into, offers story-telling which is full of heart and humour, multi-layered, rich in atmosphere and moves along at a fair pace. The chapters are short and sweet, with some great unscripted descriptive narrative and intelligent observational dialogue. Jules, the newly arrived vet, causes a ruckus in this small community, by closing down a family run business which has become unmanageable and downright dangerous, heaping onto himself the focussed wrath of Sophie, who does love a ‘good cause’ to become passionate about, particularly when she can deflect some of her own problems for a while. Not so good for her mother, Amelia though, who is as attracted to Jules, as he is to her.

Amelia has one potential rival for her affections and although she is a little uncertain about how to handle the situation, given that she is so not in tune with modern dating protocol, she does eventually manage to fend her off permanently, although not without the odd awkward incident. No raw passion or lust, just a profoundly touching story of two middle-aged, emotionally vulnerable people who are attracted to one another, coming together naturally, when the time is right and each have sorted out their feelings about each other and the personal baggage they both carry. Amelia and Jules are also mature and sensible enough to realise that they will be better together, if they have the full support of their respective families and close friends, so once Sophie and Jules have made peace, Amelia’s second daughter offers her blessing and Jules’s much younger son is ready to have someone else step into his mother’s shoes, then the green light definitely means ‘go’!

There is quite a profusion of ‘bit part’ characters, who make this saga what it is, bringing life to the village in a very three dimensional way. None of them are particularly complex, although all are engaging, sympathetically drawn and carefully defined by the author. The unique dynamics of so many diverse and multi-faceted personalities really works, making them easy to connect with and invest in as a group. Some of them might seem, and indeed are, a little larger then life, however there is a good synergy between them, which makes this strange mix work really well.

Minna has written a compelling and lovely, ‘escape into’ story, which immediately put me at ease and drew me in with a real sense of time and place, leaving me feeling totally relaxed and unhurried. A lovely fun read for anytime of the year!

I was really undecided about a review rating for this book, so here at Fiction Books Blog I am awarding 3.5 stars, however for any external review site this will be rounded up to 4 stars.