The Diabolist
by Layton Green
Review 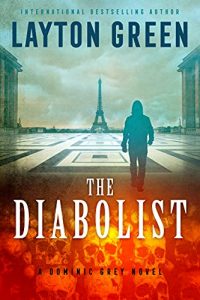 In this gripping thriller, the bizarre murder of a Satanic priest in San Francisco draws Dominic Grey and Viktor Radek, private investigators of cults, to the scene.

Witnesses claim a robed figure, seemingly able to appear and disappear at will, set fire to the priest. When the leader of another Satanic cult in Paris dies under similar circumstances, the case only grows stranger… and more dangerous.

Convinced that a charismatic New Age prophet is behind the murders, the investigators undergo a perilous journey into the world of the occult as they try to penetrate the prophet’s inner circle. From the catacombs of Paris to London’s nefarious East End, from the haunted walls of York to a monastic fortress in the Sicilian wilderness, the case plunges Viktor and Grey into a vortex of black magic, ancient heresies, and the dark corners of their own pasts.

The Diabolist is a chilling novel that not only pulsates with action and suspense, but also mines a trove of fascinating historical, philosophical, and paranormal research to probe some of our closest held beliefs. From the opening pages to the astonishing conclusion, this latest instalment in one of today’s most original new thriller series is not to be missed.

“They called themselves the House of Lucifer. Thirty minutes before midnight High Priest Matthias Gregory swung wide the doors to Red Abbey, and one by one the members filed inside.

The interior was a Gothic-inspired mockery of its Catholic counterpart: the crimson walls and vaulted ceiling hovered over the aisles with garish menace, pentagrams served as stained glass windows, an inverted crucifix hung on the wall behind the pulpit. Guttered candles lit the interior with a red glow, and Matthias had to admit the architects had achieved the desired effect: He felt as if he were walking straight into the mouth of Hell”

“Grey’s own shihan had insisted that respect came before all else; no one should learn how to harm another human being before learning how to value one”

“What is there to fear except a life unlived”

“True honesty was a myth anyway, he mused. No one revealed the entirety of self”

“It’s difficult to help those who refuse to help themselves”

‘Religious phenomenology is simply anthropology of the mind’

For me personally, as well as being the very current Layton Green, this is an author who is surely destined to rival legendary writer of the occult thriller, Dennis Wheatley and his more recent contemporary, Dan Brown.

With his in-depth knowledge and meticulous research into his chosen genre; together with his well defined, complex and multi faceted characters; all so ably supported by some excellent visually descriptive and intense dialogue, a unique and unconventional approach to storytelling and a mature, skilled and frankly mind blowingly scary plot building ability, Layton has to be one of my ‘best read’ authors for some considerable time.

Layton has surely taken ritualistic description to a whole new level of intensity, in this his third Dominic Grey adventure, with his detailed, graphic narrative and seemingly non-stop, blood curdling action, which sets the pulse racing and the heart beating out of control.

When I wasn’t being scared witless, I was being treated to a truly complex and detailed insight into the world of  the occult and Satanism, together with some well informed, meticulously researched and sympathetically articulated information of an almost theological nature ……., which had me reaching for the ‘Google’ search button, again and again. The reader needs to be prepared to digest and absorb this cornucopia of information, as a well informed and expansive window onto the world in which Layton’s characters of Dominic Grey and Viktor Radek live, breathe and sleep! Although a still slightly opaque window, where I didn’t feel that perhaps all the questions had been answered, I was left to examine several of my own thoughts and beliefs and to draw many of my own conclusions.

I constantly found my views and opinions challenged and not all my questions answered, as I was drawn into Dominic and Victor’s arcane and introspective world. The partnership between the two men, is a relatively new one, which to me, cannot yet be described as a friendship, as the level of trust and open dialogue are not quite transparent enough and not all thoughts and ideas are shared. Both men are loners, used to keeping well buried secrets, carrying deeply entrenched beliefs and having emotions still raw and sometimes barely controlled.

As this, the third case on which the two companions embark together, unfolds, the communication between them is still sporadic and very much incomplete, which this time, places both their own lives and those of others in danger. As Layton peels back the layers of their introspection, he begins the process of uniting them, building on their tenuous trust and has them sharing personal and private information.

This case is special and by far their most dangerous to date, as Viktor’s own life is threatened explicitly when his nemesis decides to make things very personal. A long ago, but never to be forgotten love triangle, is laid bare, with unhealed wounds and old grudges brought very much to the forefront of a plan to rewrite religion on a global scale!

A challenge to all you Dan Brown fans out there – Try this book and you’ll be hooked – There’ll be no going back!!

As The Diabolist was a review request, a complimentary Kindle download was sent to me by its author, Layton Green.