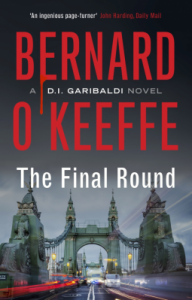 Enter DI Garibaldi, whose first task is to look into Bellamy’s contemporaries from Balfour College. In particular, the surprise ‘final round’ of questions at this year’s charity quiz in which guests were invited to guess whether allegations about Melissa Matthews and her Oxford friends are true.

These allegations range from plagiarism and shoplifting to sextortion and murder… 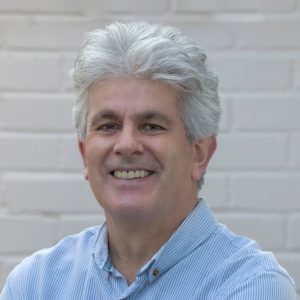 Bernard O’Keeffe worked in advertising before becoming a teacher. He taught for many years, most recently at St Paul’s School in London, where he was Head of Sixth Form.

He lives in Barnes, where his latest novel The Final Round (the first in a new series featuring DI Garibaldi) is set, and when he is not writing spends too much time watching QPR and listening to Leonard Cohen.

Bernard has few claims to fame, but counts playing football with Nick Hornby, giving Clare Balding interview practice, having lunch with George Best and nearly being recruited as a spy, as some of his most significant achievements. Oh! and he also taught members of “Mumford and Sons” and “Noah and the Whale”

The towpath is packed, the walkway beside the river is four or five deep, and the balconies of the Lonsdale Road houses are buzzing with parties. ‘The Bull’s Head’ heaves on its busiest day of the year, and this normally quiet area of London is crowded with people, for many of whom this is the only time they ever visit the sleepy ‘village by the Thames’.

Phil laughed. ‘I suppose we’ll have to go? Of course you’ll go. You always go. That’s the thing about you lot. You can’t stand each other but you can’t miss the chance to remind yourself why.’

“Now, at the station, his actions last night and his conversation this morning seemed even worse. The passing hours had thrown their horror into sharp relief and Garibaldi yet again found himself wondering why, when he was trained  to make the right calls and to consider everything anyone did carefully and logically, he had a habit of doing the exact opposite when it came to his own behaviour”

‘Look, I really don’t see how these questions are relevant.’ ‘Maybe they’re not,’ said Garibaldi, ‘but you never know what you need to know, do you? So the idea of relevance is, let’s say, problematic.’

“Over the years in which Milly had been driving Garibaldi, an intimacy had developed between them. There was something about sitting side by side, facing forwards and not looking each other in the eye that made frank conversation easy”

Righty Ho! I guess you know what’s coming now? That’s another new series added to my list, as I just can’t resist a good murder mystery / police procedural. It’s also not often that I manage to find myself meeting a cast of new characters right at the beginning of their literary journey, so I can’t miss out on this opportunity, can I?

The opening couple of pages really helped to set the scene for me, then it was straight into the action, followed by a very thorough and well described and detailed police investigation, leading to a climax which didn’t really end well for any one of the multiple suspects. Definitely food for my macabre sense of justice!

I really honed in and enjoyed the fact that the author took license from his previous occupation as a teacher, when casting his characters and including narrative detail to the storyline, which added a really nice personal touch! I also liked the fact that the story was set in a real place, with genuine street names and at tangible locations, which I could locate and follow on a map to plot the crime scene for myself.

A well constructed, multi-layered storyline, where plot and characters play an equal role as the backdrop to a police procedural, where Garibaldi eventually works out ‘whodunnit’, although I am still wondering exactly how he managed it, as there were so many crimes, so many suspects, so many red herrings and false leads, with the eventual outcome not making great closure for the police crime numbers!

The chapters are just the right length to keep the pace moving along at a steady rate, the story is very textured and intense, definitely not designed to put me at ease or feeling comfortable, as I spent most of my reading time sat on the edge of my seat and turning the pages ever more rapidly, as the lies just kept stacking up and my suspect list grew longer and longer. After one particular aspect of the case was solved quite early on, I whittled my list down to a more manageable number and I kind of worked out who the protagonist was, but not quite! You really do have to read this one right to the very end, as those final few twists and turns definitely make all the difference!

What can I say about the multi-faceted cast of suspect characters, which might even begin to put them into a good light. Bernard has done an excellent job of creating a whole group of people, none of which I would personally have minded being locked up for a very long time. How many times did they play the ‘When we were at Oxford’ or ‘When we left college’ card, as if they expected recognition of  that to offer them special treatment or privileged interview rights! They really were an obnoxious, self-centred bunch, although peel back the superficial layers of self-importance and the artificial veneer of respectability and you were actually left with some very hollow shells of emotionally damaged humanity, unable to connect either with each other, or anyone outside of their circle, with any degree of synergy or interest and with zero genuine compassion.

I’m still in two minds about the character of Jim Garibaldi, although I am hoping for a lot more tangible character development in future stories, which might offer me a little more personality to invest in. Although it is never really discussed in too much detail, Garibaldi obviously has some pretty serious emotional baggage he is carrying around with him. However even making allowances for that, I really did get to the stage where I could have given him a good kick up the backside. As DI, he never took control of a case briefing, leaving that function to be fulfilled by his DCI. In fact he only really had direct contact with one member of his team, DS Milly Gardner, and that only because she is also his unofficial driver, as Garibaldi refuses to take a driving test. He actually spent much of the investigation fantasising about Millie and his DCI, Karen, when he wasn’t contemplating his own current love life. He is also rather too fond of letting everyone know how well-read he is and his vague, often almost disinterested attitude to the case, got to be quite annoying and irksome. However, somehow he did get to crack the case eventually and he handled a very traumatic and emotionally distressing climax, with some genuine empathy. In fact, his whole demeanour and rather ‘sans fait rien’ attitude, together with his eccentricities and constant lapses in concentration, almost put me in mind of a modern day Sherlock Holmes and I do hope that Bernard isn’t too appalled by that analogy!

Some seriously confident plot and character building paves the way for this new series, I can’t wait for the next ‘Garibaldi’ instalment, just so long as I can train myself to separate the man from the biscuit!

In the Barnes area of London, I think it is fairly safe to assume that – “The female of the species is more deadly than the male”

A complimentary kindle download of this book, for review purposes, was made available by the publisher, Muswell Press and supplied by NetGalley.

You get away with murder... You make people disappear... You come back for revenge.

Max, Janie and Ross return in the second gripping novel in this explosive Scottish crime series.

Out now in all formats.
https://amzn.to/3MZA57L