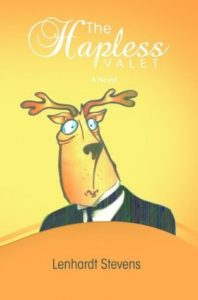 In this offbeat mystery, Draper Burns, the titular valet and, chiefly, troubleshooter for a global media mogul is dispatched to Portland, Oregon where the movie–The Vengeful Forest–is being filmed by a studio recently acquired by his boss.

After the screenwriter’s apparent suicide, Burns, sometimes artfully, often clumsily and neurotically, delves into the on-location movie world and underbelly of Portland where intrigues overlap, frustrate his assignment and put his and others’ lives in danger. 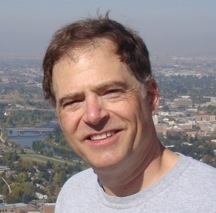 When I asked Lenhardt Stevens for a short biography to introduce himself to a wider audience, this is what he had to say:

“I wish I could report to you that I won a gold medal in London for saber fencing; however, I live a more pedantic life in Portland, Oregon, USA, as a lawyer, formerly, and property manager and business investor, currently. I’ve written several novels, all with the Pacific Northwest as the actual or spiritual setting, before my debut publishing of ‘The Hapless Valet’. Although I’ve had sojourns in the Far East, Micronesia and east coast U.S., Oregon is where I grew up, work, snow ride, sail, beach comb, went to school and raised my family. Portland makes an excellent setting to energize the detective genre. It’s a city of recent transplants from all over the world looking for adventure, an indie lifestyle and intrigue; kind of a Casablanca with inclement weather and microbrews”

Lenhardt uses his writing, as a time to relax and be creative, as a catharsis to his ‘day job’, which is administrative and devoid of artistic creativity. As such, he does not put himself under time constraints to write a certain number of words at a time, or rush manically to complete a story.

Although Lenhardt already has an idea for another book on the drawing board, it is not a follow-up to ‘The Hapless Valet’. However, with his desire to create interesting characters and situations, to set his work apart in the already saturated mystery marketplace, I think that some more ‘Draper Burns’, is just what we need.

As soon as he stepped from the ladder, the trap door slammed shut above him. Geraldo squinted in the near darkness; wrinkles fanned from his dark oaken eyes.

A click and a string of clear and buzzing Christmas lights lined the ceiling. The walls of the tunnel materialized in a mist of light and ran several paces and elbowed to the left. It was damp and cut through earth; the unevenly spaced iron I-beams supporting the ceiling were bent and rusted. Geraldo gazed up to the trap door and shouted ….

“You should appreciate turning out as well as you did.” He took her hand and squeezed gently. “You grew up in a narcissistic, boozy, scandalous Hollywood household. But with a lot of hard work and determination, you freed yourself. Now you’re engaged to a narcissistic, narco-terrorizing, double crossing Hollywood movie star. Isn’t that progress?”

“If adhered to, my story will make a splendid film, but its richness and literary texture shines in the novel. Unfortunately, there’s scant ability in the publishing industry to recognize talent. They only have eyes for literary dinosaurs and those who hack out hackneyed pulp thrillers, romance, chick-lit and sci-fiction drivel. Its all part of the obsession with making money. I can’t begrudge that. I’m a realist. Yet, so far I’ve found publishers as witless at recognizing superior writing”

“The urgency became a thousand times so. If any of the signposts in Portland had made his venturing forth haphazard and meandering, that was changed by a blast propelling him to either a job well done or a ghastly failure. The stakes couldn’t get any higher”

“That’s unfortunate because a labor of love, though short of net income, can be enriching in other ways”

In this, Lenhardt Stevens debut novel, I suspect that we are witness to the continued rise in popularity of the ‘mystery caper’ genre, which diverges from a traditional mystery through its comic elements, adventure, or unusual cleverness and focuses on the steps taken to commit the crime and the personalities of the criminals.

The pace of the action is frenetic and the melting pot of the many secondary characters is diverse and divergent. The character personalities, dynamics and relationships are multi-layered and often difficult to follow and understand, with the many shady, sleezy individuals all being hell bent on self-protectionism and therefore by default making them all appear like guilty suspects. They are all prepared to point the finger of blame and guilt at each other, as old jealousies, an assortment of dubious motives and long ago instilled rivalries, are forced into public view, in the light of unfolding events, which change almost by the minute.

The narrative and dialogue, is on the whole snappy, crisp and free flowing, although at times it seemed as though the author wrote as though he were penning a script to be viewed by an audience, rather than a conversation committed to paper to be read. At times, it became a little difficult to work out just who was saying what to whom, although this is not too much of a problem, as it is more than compensated for by the dry wit, humour and irony in the narrative.

Into this melee of distrust and self-destruction, Lenhardt takes the opportunity to introduce us to his eminently interesting and enigmatic character, Draper Burns.

Ex-French Foreign Legion, suave, debonair, charismatic, the superlatives keep coming to mind which can adequately attempt to define and describe this newly independent and self appointed ‘gentleman’s gentleman’.

Draper is sanctioned under his new guise of valet, by his employer Hap Wiseman, to investigate claims that Hap’s new partner in his recently acquired movie making venture, actor James Delaney, may be inextricably linked to Mexican drug baron Barosa. Were this allegation to be proved true and leaked to the pundits of the film world, the ramifications for the company’s current project in filming ‘The Vengeful Forest’, would be far-reaching and catastrophic.

Unfortunately for Draper, it would appear that his employer has been less than totally honest with him and he has only been told half the reason for his current mission. The true extent of his investigations, Draper is left to discover for himself, which he does eventually, but not until he is up to his neck in the subversiveness of the many characters he is investigating and much later on in his investigations, when it is almost too late. Draper is left reeling by his new found information and now truly realises just what it takes to be a discreet and respected valet.

The character of Draper stands up to scrutiny quite well, in this his first outing, although when he is involved in a particularly nasty scene when attempting a break-in at the film star’s house, one might have questioned whether his Foreign Legion training and expertise, proved to be much of an asset. Also, his predilection for acquiring watches which don’t belong to him, although which in this particular case was a pivotal clue in helping to track down the killer, is a trait which doesn’t sit well for a man in his revered and respected position and one which I found it difficult to understand and reconcile with. I would ideally like to read another adventure featuring this strange paragon of justice, just to see how Lenhardt proposes to develop the character of Draper Burns into the future.

“Discretion is a virtue of a valet,” she said… With a smile of self-assurance, he dipped his head, reminding her that dignity was another of a valet’s virtues

This book was a complimentary Kindle review copy, sent to me by the author, Lenhardt Stevens.