I have to be up front with you and admit that science fiction and fantasy are definitely not my most favourite of genres, so when I was approached by Amber at Midas PR, with the request for a review of this book, I gave great thought as to whether I was going to be the best person for the job. However, due to the rather tight Blog Tour time schedule for a full read and review and given my admission about the book’s storyline, Amber and I agreed a compromise that I might possibly read a small selection of the stories and see how I got on with that.

How surprised and how totally wrong could I have been about what to expect from my albeit reduced reading from the collection. This is a book I shall be dipping in and out of often, until I have read all the stories!

This is a lovely compact Blog Tour, with a couple of stops each day, so plenty of opportunity to visit other sites and check out the stories from a different perspective! Thanks also go out to the teams at Saga Press and NetGalley

THE HIDDEN GIRL AND OTHER STORIES

Ken Liu is one of the most lauded short story writers of our time.

This collection includes a selection of his science fiction and fantasy stories from the last five years — sixteen of his best — plus a new novelette.

In addition to these seventeen selections, The Hidden Girl and Other Stories also features an excerpt from book three in the Dandelion Dynasty series, The Veiled Throne. 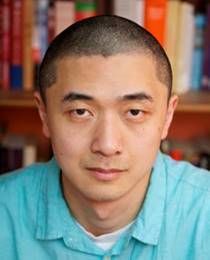 Ken Liu is an American author of speculative fiction. He has won the Nebula, Hugo, and World Fantasy awards, as well as top genre honours in Japan, Spain, and France, among other countries.

Prior to becoming a full-time writer, Ken worked as a software engineer, corporate lawyer, and litigation consultant. He frequently speaks at conferences and universities on a variety of topics, including futurism, cryptocurrency, history of technology, bookmaking, the mathematics of origami, and other subjects of his expertise.

Ken has also translated several works of Chinese science fiction and currently lives with his family near Boston, Massachusetts.

“A good story cannot function like a legal brief, which attempts to persuade and lead the reader down a narrow path suspended above the abyss of unreason. Rather, it must be more like an empty house, an open garden, a deserted beach by the ocean. The reader moves in with their own burdensome baggage and long-cherished possessions, seeds of doubt and shears of understanding, maps of human nature and baskets of sustaining faith. The reader then inhabits the story, explores its nooks and crannies, rearranges the furniture to suit their taste, covers the walls with sketches of their inner life, and thereby makes the story their home.”

“What’s the point of studying dead computer languages, anyway?” Ona said ….. “We study classical languages to acquire the habits of mind of the ancients,” Ms. Coron said. “You must know where you came from.” ….. Ona knew she should shut up, but-just like the recursive calls in Ms. Coron’s diagram had to return up the call stack- she couldn’t keep down Loudmouth Ona. “I know where I came from: I was designed on a computer, grown in a vat, and raised in the glass nursery with the air from outside pumped in.”

“I’m not my father,” she said. “And you’re not your parents. Family is a story that is told to you, but the story that matters the most you must tell yourself.”

“The images she had seen went through her mind again and again. Sometimes understanding comes to you not through thought, but through this throbbing of the heart, this tenderness in the chest that hurts.”

“Parents fear to be forgotten, to not be understood by their children.”

“She would show them how she now understood that digging into the past was an act of comprehension, an act of making sense of the universe.”

“Without you having to do anything, the phone brackets the shot so that you can pretend to time travel, to pick the perfect instant when everyone is smiling.  Skin is smoothed out; pores and small imperfections are erased. What used to take my father a day’s work is now done in the blink of an eye, and far better. Do the people who take these photos believe them to be reality? Or have the digital paintings taken the place of reality in their memory? When they try to remember the captured moment, do they recall what they saw, or what the camera crafted for them?”

“Pictures are important,” I’d tell them. “Our brains are so flawed, leaky sieves of time. Without pictures, so many things we want to remember would be forgotten.”

“So Abigail went, lifted the sheet, and gazed upon the wreckage of Hayley, of our life. She took pictures, too. “This I also want to remember,” she mumbled. “You don’t turn away from your child in her moment of agony, in the aftermath of your failure.”

“I screamed, I sobbed, I sought help. No therapy, no medication worked. Finally, in a numb fury, I deleted all my digital files, shredded my printed albums, broke the frames hanging on walls. The trolls trained me as well as they trained my armor. I no longer have any images of Hayley. I can’t remember what she looked like. I have truly, finally, lost my child. How can I possibly be forgiven for that?”

MEMORIES OF MY MOTHER

“I was on a very long trip,” she said. “The ship went so fast that time slowed down inside. It felt like only three months.” Dad had already explained it all to me: this was how she would cheat time, stretch out her two years so that she could watch me grow up….

“I got to see less of you than most mothers, but also more.”

“We’re all thieves in this world of suffering,” the nun says. “Honor and faith are not virtues, only excuses for stealing more.”

“I want to hone my talent so that it shines brightly, terrorizing the unjust and lighting the way for those who would make the world better. I will protect the innocent and guard the timid. I do not know if I will always do what is right, but I am the Hidden Girl, and my loyalty is to the tranquillity yearned by all.”

“I am the Hidden Girl, and my loyalty is to the tranquillity yearned by all.”

I decided that the opening story of the book Ghost Days, would be an automatic choice, as would The Hidden Girls, from which the book takes its title. The other two stories were picked totally at random, and if I am being completely honest, based solely on the fact that neither had titles which sounded too obviously science fiction or fantasy oriented.

Each of the stories I feature, were strong and totally engaging; intriguing and very thought provoking. I don’t know if it was a sheer coincidence, but all my choices had strong women as their central characters, although all the storylines were well rounded and written with an even hand.

Each story had a stand out theme and moral, relevant to modern day life, although all took me to dark places, which were chilling and ominous in their reality and their implications for the future of humanity itself.

Spanning multiple timelines, the stories touched on the legacy of our inherited memories and heritage and how we should strive and fight to retain them and their imparted knowledge, for as long as we possibly can, with the warning that humanity’s belief in itself as a transformational species, is flawed beyond repair.

All the stories were tinged with a melancholy air and for me personally, the epithet that nobody walks the earth, or any other sphere, totally trouble free. Hence none had a particularly happy ending and with unwritten prophecies, which were chilling in their implications.

As short stories, each one of my selection, with their diverse and complex themes, felt remarkably and satisfyingly complete, written as they were, by an author supremely confident enough in his ability and self-imposed high standards, to cross the genre divide at will and who does so with such consummate ease, that I didn’t even notice it had happened.

As only a very occasional short story reader, I was hooked by Ken Liu’s natural range of storytelling abilities and his often provocative characters, who I found myself both sympathising and empathising with, almost from the first time they spoke, such were the powerful connections made by Ken with his characters and his characters with one another. His thought provoking narrative and dialogue, played on many of my emotions and his lapidary prose and use of language, were a joy to immerse myself in.

I shall definitely be revisiting the book, as and when my schedule permits, to finish reading the other stories in the collection, confident that my experience with the science fiction and fantasy elements of Ken’s writing, won’t reinforce my previous reluctance to embrace them as part of my future regular reading journey.

“What makes reading so wonderful, is that every reader takes a different journey!” 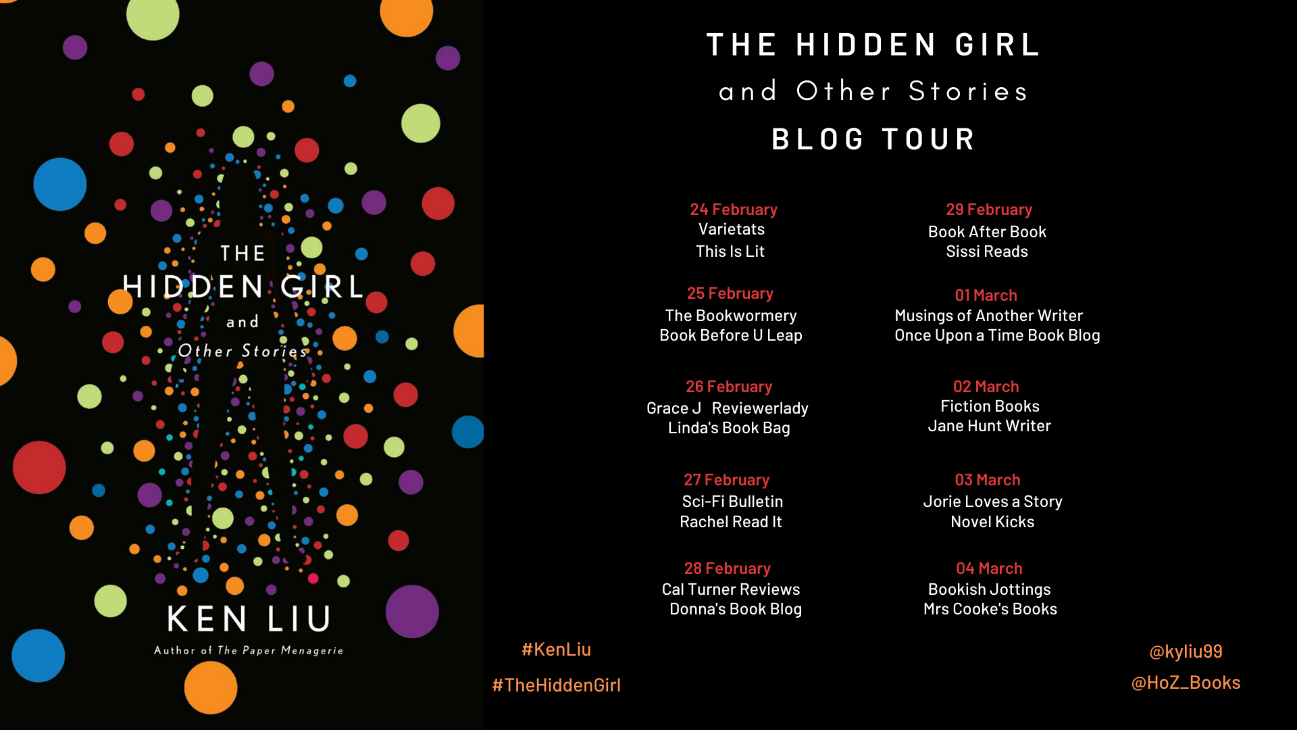 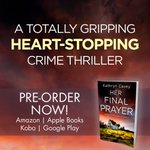 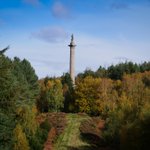