The House On Willow Street
by Cathy Kelly
Review

THE HOUSE ON WILLOW STREET 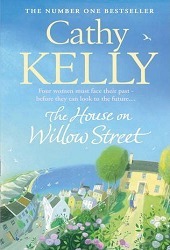 Welcome to Avalon: a quaint, sleepy town on the Irish coast.

Nothing has changed here for generations – least of all  the huge mansion on Willow Street; the house in which sisters Tess and Suki Power grew up.

Now, years later, Tess is trying to save her marriage and protect her glamorous sister Suki who has come back home, dreams shattered.

Similarly, Mara Wilson is seeking refuge from a broken heart at her Aunt Danae’s house.

And Danae, the inscrutable postmistress, is hiding dark memories of her own.

Cathy Kelly born in Northern Ireland, but raised in Eire, where she still lives, with her husband and family in County Wicklow.

Her career for some thirteen years, was as a newspaper journalist with a national Irish Sunday newspaper, where she worked in news features, as an agony aunt and the paper’s film critic.

Cathy published her first international bestseller, Woman To Woman, in 1997, although she did not become a full-time writer until she had penned a further two books, finally deciding to leave the world of journalism in 2001.

Her trademark is warm and witty Irish storytelling about modern life, always with an uplifting message, a sense of community and strong female characters at the heart.

Cathy also has a passionate interest in children’s rights and is an ambassador for UNICEF Ireland. Her role for UNICEF is a Global Parent, which means raising funds and awareness for children orphaned by or living with HIV/AIDs.

“I am so lucky that I have wonderful readers and I think – have no real idea, though – that my humour and love of people come through in my books. It’s funny but the empathy that made me anxious for fourteen years as a journalist, now works in my favour. Empathy is a great thing to have as a writer!”

“You have to write what’s in you. You can’t sit there and look at what’s successful and try to write to fit in with that. Publishers get so many manuscripts from people trying to be like somebody else and not just being themselves. It’s so important to find your own voice”

“Danae Rahill had long since learned that a postmistress’s job in a small town had a lot more to it than the ability to speedily process pensions or organize money transfers.

She’d run Avalon Post Office for eighteen years and she saw everything. It was impossible not to. Without wishing to, the extremely private Danae found herself the holder of many of the town’s secrets”

“It’s not who you are that matters. It’s what you do with who you are. The blood running through your veins is the only blood that matters. When you go out into the world, you have the chance to leave the past behind”

“A billionaire Swiss friend had put it wonderfully when he said that having money merely emphasized what you were all along. If you were a poor son of a bitch, you’d turn into an even worse son of a bitch with money. But if you were fundamentally decent, then you’d stay that way – simply with a nicer bank balance”

‘It’s not who you are that matters. It’s what you do with who you are.’

The House On Willow Street, is so much in the style of the Cathy Kelly I remember reading several years ago and it was therefore almost akin to catching up with an old friend and listening to her latest news and gossip. For me personally, Cathy has already firmly established herself in the upper echelons of female Irish authors, who are such consummate story tellers, able to keep the reader spellbound with their seemingly effortless, conversational writing style, characters who are easy to connect with and richly crafted storylines I can relate to.

There is a slow, yet methodical, multi-layered story development, as we are introduced to the individual characters living in Avalon and are on the outside, looking in, privy to their unique stories and witness as their lives become inextricably linked and circumstances take them back to their roots. A place which each of them has their own reasons to want to forget, yet which calls to them like an old friend; or for some, a place of sanctuary and solitude in which to rebuild their shattered lives.

Each of them has struggled with difficult issues, heart-wrenching decisions and have been forced to face and conquer their own demons and they have each needed to call on more reserves of inner strength, than they knew they possessed, as they give serious thought to the direction in which they would like their lives to go. The power of true friendship is examined and when the chips are well and truly down, the overriding sanctity and strength of the network of family and friends, comes to the fore.

As Cathy takes us on the unique journey that each of the characters has to make, she provides a multi-faceted study of just about every human emotion; from jealousy, greed and revenge; through to loneliness, feelings of worthlessness and self-hatred; even desperation, desolation and rejection.

I felt that Danae’s story was probably the most difficult to predict the outcome of and Cathy did an excellent job of revealing the details a little at a time, so that although I thought I knew the full picture, it really was a fluid situation and kept me guessing right until the end.

The paths of these journeys are destined to cross time and time again, before each of the protagonists come to realise, that they are all basically searching for much the same thing – peace, stability, love and a sense of belonging – of being accepted for themselves and realising that their individual and collective contributions to this small and intimate community, are something to be built upon and treasured.

The book as been heralded by some, as a story of friendship and the coming together of the lives of four women, however I personally felt that Cashel, the forceful male protagonist in the saga, is a pivotal part of the equation, whose life is already intertwined with that of Suki and Tess, whilst his current business relationship with Mara, links her and Danae with the future they will all share in Avalon.

Tess – A new person was coming into this world and it was connected with her and her children. She would do the right thing. That was Tess Power’s way.

Suki – The woman had been right. Suki had always been waiting for some guy to fix it all – and she still was – So much for her feminist principles! She might have been talking the talk but she’d never really walked the walk. Instead, she’d moved from one man to the next all her life. And that had to change.

Mara – She wished she had a magic wand to fix all past broken romances. But then, if she had a wand, she might have fixed her own.

Danae – Mara’s pernicious influence was changing her, making her all friendly and chatty, after all these years of keeping herself to herself. But it felt good. Danae smiled to herself. She had to admit it – opening up to the world felt good.

The characters are all authentically and sympathetically portrayed, feelings and emotions are analysed and discussed in detail and situations are truly perceptive studies of life in today’s modern world, couched in excellent dialogue and prose of the highest calibre.

Perhaps the single most important line in the book, may be the most profound and far-reaching, yet is the simplest thing that any one of us can do for someone else, without possibly ever realising what a difference it might make, to both our own lives and theirs.

“I’d have gone mad if not for other people’s kindness over the past couple of months. Henry James said kindness was the most important word in the English language. He was right”

As this was a publisher invitation to read and review, a complimentary paperback print copy of  The House On Willow Street, was sent to me  by the publisher.