Thanks to Marlena, representing publisher Flatiron Books for inviting me to join this informal Blog Tour 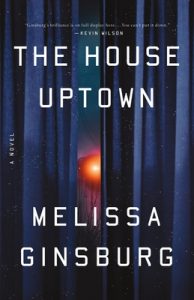 Ava, 14 years old and totally on her own, has still not fully processed her mother’s death when she finds herself on a train heading to New Orleans, going to stay with Lane, her grandmother whom she’s never met.

Lane is a well-known artist in the New Orleans art scene. She spends most of her days in a pot-smoke haze, sipping iced coffee, and working on the mural that has been her singular focus for years. Her grip on reality is shaky at best, but her work provides a comfort.

Ava’s arrival unsettles Lane. The girl bears an uncanny resemblance to her daughter, whom she was estranged from before her death. Now her presence is dredging up painful and disturbing memories, which forces Lane to retreat even further into her own mind.

Ava, meanwhile, is entranced and frightened by her grandmother. She wants to be included in her eccentric life, but can’t quite navigate Lane’s tempestuous moods.

Attempting to keep the peace is Oliver, Lane’s assistant and confidant. As this unlikely trio attempts to find their way and form a bond, the oppressive heat and history of New Orleans bears down on them, forcing them to a reckoning none of them is ready for. 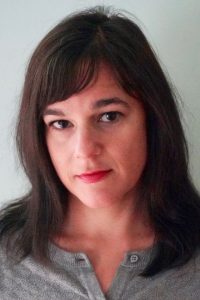 She is Associate Professor of Creative Writing and Literature at the University of Mississippi.

She is the author of the novels The House Uptown and Sunset City.

Her poems have appeared in the New Yorker, Guernica, Kenyon Review, Fence, Southwest Review, and other magazines.

“Lane came awake to the sound of unoiled hinges, her heart pumping hard. She had been dreaming of a massive cloud, a storm that blew all the doors open, dread billowing around her. She struggled to wrench herself from the panic of the dream. The clock read 2:30. She inhaled deeply, lay still, willing her body to relax. She listened to the house settle, visualized her daughter Louise tucked safely in bed down the hall. Lane was almost back asleep when she heard a sound that shouldn’t be there – footsteps? Voices? Lane’s arms tingled, her heart pounded again. She sat up in bed, reached for the light, froze at the distinct soft thud of the kitchen door closing…”

“Ava was on a train called the City of New Orleans, on her way to the actual city of New Orleans, where her grandmother lived. She carried a backpack filled with books and a small suitcase of clothes. It was summer. She had finished the eighth grade four weeks before. Her mother had been dead for three. Louise had walked into the emergency room with a bad headache, and twenty hours later she was gone. A freak thing, the doctors said – a rare virus that attacked the brain stem”

“Something distressing lived in a part of her mind she had no access to, but she caught glimpses of it sometimes. Slivers of trouble coming, or trouble already happened and forgotten but spreading its damage around, just beyond the edges of thought”

“Louise understood that her mother viewed kindness as a trap”

“Annihilation was right at the center of life, ready to erupt and cover everything over with loss”

How could a book so relatively short in length, with just a handful of key characters, be packed so full of sadness?

Not the kind of sadness which causes great heart wrenching sobs, but the kind of sorrow that comes from deep within, which has the tears silently but inexorably rolling down your cheeks like an unchecked river.

There are two clearly separated strands to this dual timeline saga, which are cleverly blended and interwoven at several different stages in the storyline, until they connect in a climax which left me breathless, satisfied with the outcome, yet not fully sated, as I am a reader who craves final closure before I turn the last page of the book.

Whilst the whole experience wouldn’t have been as richly complete without the background mystery story, this was for me, a book almost exclusively driven by its characters, with their individual idiosyncrasies and insecurities, their relationships and interactions with each other, their eventual bonding together, and their ultimate, devastating final parting chapter, from which there was no return.

What makes reading so wonderful for me, is that with every book I read, I look forward to being taken on a unique journey, and this story definitely opens the floodgates to those individual experiences. Beautifully structured, wonderfully textured and multi-layered, author Melissa Ginsburg held me in the palm of her hand from beginning to end, with her consummate story building skills and her authoritative and confidently written artistic and lyrical prose.

Compellingly descriptive and observational narrative is the glue which holds the storyline together, offering a real and tangible sense of time and place. I could imagine myself transported to Lane’s house, where family heirlooms and treasures have been consigned to cupboards, as almost every available inch of space has been transformed into a single giant art studio, with the odour of paints and thinners vying for any available oxygen, with the aroma of coffee and pipes of ‘pot’. On down into New Orleans itself, where the ravages of Hurricane Katrina are still only barely concealed in many areas, yet the lovely waterside views compete with some great sounding eating establishments, where those succulent smells and tastes almost leap off the page at me, leaving me licking my lips and consoling my rumbling tummy!

Told with real heart, intuitive empathy, social perception and touching passion, the rich dialogue and interactions between the characters, bring the pages to life. The lies and secrets so well hidden as to almost be forgotten by a generation, yet so astutely visible to the naive eye and intuition of the young. The slowly evolving relationship between grandmother and granddaughter, so long estranged, thrust together, yet with so little time to explore and evolve, before the cruel hand of fate wrests control from their grasp. The detached fragility of the mind, which has the power to leave the body so vulnerable and weak. All these emotions and feelings snatched away and destroyed by the avarice and greed of one individual, who sets off a chain of events they have no power to stop, even as they are seeking atonement for their indiscretions. A complex character cast which on the whole, I found it quite difficult to engage with, despite the fact that they were all beautifully and authentically drawn and defined. maybe it was because of the personal baggage they were all weighed down with, which because open dialogue and synergy between them wasn’t great, they were all shouldering alone and in lonely solitude, as they each searched for that illusive sense of belonging and being loved.

A Kindle download of this book, was kindly gifted to me for review by its publisher, with fulfilment by NetGalley

Written by Yvonne
14 comments
Save Her Child
by C.J. Lyons
Books On Tour
Review
FacebookTwitter
King Genghis I
by Jonathan Yalon
Review