The Hunted
by P.R. Black
Review 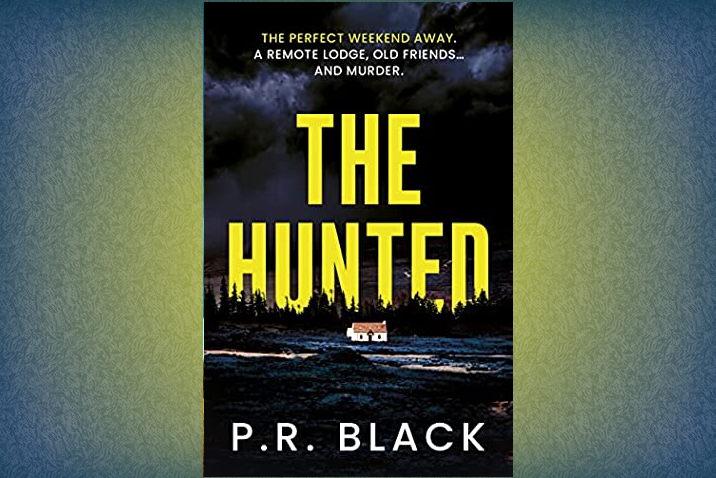 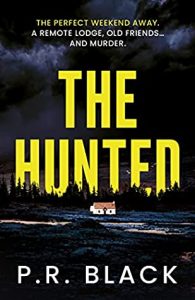 It’s been twenty years since they were all at school together.

So when a group of female friends gather at a beautiful but isolated Scottish island lodge for a weekend away, they’re looking forward to relaxing, sharing updates on their lives, and reminiscing.

The furthest thing from their minds is murder.

But even though they’ve known each other since high school, some of these women have secrets. Dark secrets that can ruin friendships, ruin marriages – ruin lives.

Things you thought you knew and loved can turn out to be your biggest nightmares. And when recriminations start to fly, it soon becomes clear: it’s not a question of when, but if, these old friends will ever make it home again…

His short stories have been published in several books, including the Daily Telegraph’s Ghost Stories and the Northern Crime One anthology.

“At some point after wiggling the last drops of petrol out of the nozzle into her tank, it occurred to Shell that she was free, and she should be happy about that. She gazed at the jagged black mountains towering over the forecourt of the petrol station, and thought: It looks like they’re jostling each other to be the first to squash me”

“There are all sorts of psychological issues that can’t be diagnosed, or cured. Lack of sympathy and empathy are part of that”

“There was an almost rapt expression on Deb’s face, nothing to do with the act she was recalling, merely the act of recalling it. What was the truth in these stories, really? When the telling of the tale becomes an act in itself?”

“And this was what happened with friends, she mused. Your shared history becomes a burden. Your antic tales become an embarrassment. The old you, the one you don’t like any more, makes a reappearance, like a butterfly regressing back into a puffy, slothful grub. You’re reminded of things you’d rather forget. Your teenage triumphs become a scourge. And the friends remember every utterance you made, every error of judgement, every inch you moved out of line during your most sensitive, awkward, ignorant years”

“The Perfect weekend away. A remote lodge, old friends… and murder”

Wow! This is a book which must be read during daylight hours! Even leaving the lights on at night to read by, wouldn’t have been enough to take the shivers away, nor to dispel the secrets of those cardboard boxes, so that they didn’t cause nightmares as soon as I closed my eyes.

Ah! I can see you are intrigued now, so here’s a short resume of the storyline, minus all the gory bits…

Take a group of five schoolfriends, some of whom have met up as twos or threes in the intervening twenty odd years, but have never got together en masse before. As they don’t keep in touch on a regular basis, non-one is certain which one of them has actually organised the reunion, with each of them assuming it was one of the others. A recipe for disaster when their destination is a lodge on a remote Scottish island, only accessible by sea plane, boasting few dwellings and with no communication to the outside world, save for a patchy landline service and an even more unreliable cell phone connection.

Four of the ladies make it to Owl Tree Halt unscathed, however they receive some very garbled messages from the fifth member of their school day club ‘The Owl Society’, whom they now assume to have been the trip organiser, which become more and more strange, until it becomes clear that she will be unable to join the party after all. If only the others knew what was going on in the woods around them, they might not have been so unconcerned at this turn of events, or what was about to happen next.

As with all distant friends, memories are not always a true reflection of reality, so after a very short time in each other’s company Leah, Toni, Debs and Mouse, quickly conclude there is now more which divides them than which binds them together, although perhaps that was always the case, as long-forgotten snarky personality traits come to the fore and irritating habits cause friction.

Deb is the loudest, most forceful and insistent of the group, so when she declares that they should play ‘truth or dare, reveal the worst thing you have ever done’; followed by ‘first shag, best shag’, events quickly spiral out of control. Alcohol consumption rises as tempers flare and vitriolic but truthful thoughts are shared aloud, which once aired can never be taken back.

After infidelity is added to the long list of things which should never have happened at such an event, the ladies retire for what is left of the night, blissfully and drunkenly unaware that gruesome goings on have crept ever closer and are now happening right under their very noses.

They are woken the following morning by two very irate husbands, who have been trying to contact their wives, after the husband of the missing partygoer sent out the distress signal, although he has yet to arrive. This just adds another interesting dimension to the game being played by a mad person who isn’t interested in taking prisoners.

With anyone who gets in the way being picked off mercilessly, the remaining women have finally woken up to smell the roses and worked out who they think their menacing adversary might be, or at least one half of the team, as the maniac’s unknown silent partner, who to all intents and purposes is an innocent party, is equally deadly and deranged.

Our deadly duo might not have done their homework as thoroughly as they might have though, as they underestimate the ‘riding a bicycle’ syndrome, when desperation and the will to survive, means that skills and attributes which were thought to have been long since left behind, kick in instinctively, alongside the increased adrenalin, which helps to overcome the fear of the situation and the pain of injury.

Did anyone survive this deadly encounter unscathed? – You might just need to read the book for yourself to find out!

This story is firmly rooted in the detail surrounding the characters and their journey. The plot was quite simple, though devious, but the getting there was genuine edge-of-the-seat stuff of which nightmares are made. The storyline was well-constructed, multi-layered and textured, which made for compulsive reading that was intense and suspenseful from beginning to end.

Even though I had worked out who the principal perpetrator was quite early in the storyline, the identity of their fellow conspirator and even that there was a second accomplice, was a complete shock and provided one of those jaw-dropping dénouements which was neatly tied up in the final nerve-wracking scenes towards the end of the book.

Whilst the location of this story is fictional, there are a myriad of similar Scottish Islands which, under normal circumstances, might be lauded for their relaxing isolation, peaceful idyll and beautiful landscape. However, the ladies little piece of paradise, is now transformed into a scene of morbidly eerie silence, punctuated by screams of terror and fear. Some close attention to detail and the wonderfully visual descriptive qualities with which author Pat Black painted the scene, made this journey encapsulating and totally immersive. I left this carnage behind me, fully satisfied with my ‘armchair traveller’ experience, although I don’t think I shall be adding any remote Scottish Island retreat to my holiday plans anytime soon!

They do say that ‘hell hath no fury like a woman scorned’ and when you have five of them to contend with – you’d better take cover. Pat really managed to present and define a cast of totally unlikeable, lugubrious and dour characters. Even the ‘good guys’ are manipulative, untrustworthy in their claims of friendship and downright dishonest in their guise as devoted partners, loyal friends and attentive parents. And the ‘bad guys’ – well they are completely off the scale, with their depravity and mental torture, showing no boundaries or remorse. As a reader, for me there was no connection with, or empathy for, any of them, which I suspect was exactly as the author had intended. However, as one of the main drivers, this storyline does raise questions about the broader picture of long-term mental health, which has undoubtedly fuelled this desire for revenge and retribution. Even if a vulnerable young mind hadn’t already been damaged, possibly beyond repair, can there ever be any excuse for bullying by one’s peers, especially when the perpetrators, although technically still children, should have known better. It is of little consequence that the constant taunting by  the gang may not have caused that fragile final link with reality to snap, but it certainly never helped and now payment has been exacted in the most final and painful of ways.

This is a storyline which could easily be adapted as a film script – Think ‘Halloween’ meets ‘Chain Saw Massacre’ meets ‘Final Destination’ – and you have a good idea of how addictive it might be!

Revenge is certainly a dish best served cold and that was one hell of a roller-coaster ride!

A complimentary kindle download of this book for review, was made available by publisher Head of Zeus / Aries Fiction and supplied by NetGalley.

Any thoughts or comments are my own personal opinion, and I am in no way being monetarily compensated for this, or any other article which promotes this book or its author.

I personally do not agree with ‘rating’ a book, as the overall experience is all a matter of personal taste, which varies from reader to reader. However, some review sites do demand a rating value, so when this review is posted to such a site, it will attract a well-deserved 4 out of 5 stars!

Thank you for taking the time to read my review, I appreciate your support.