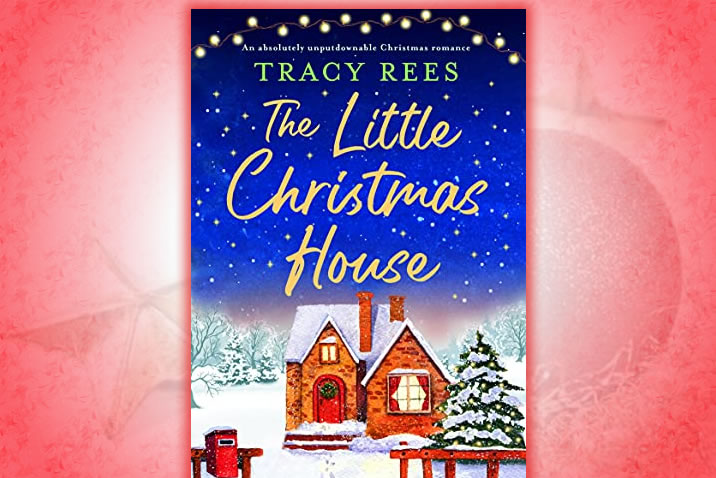 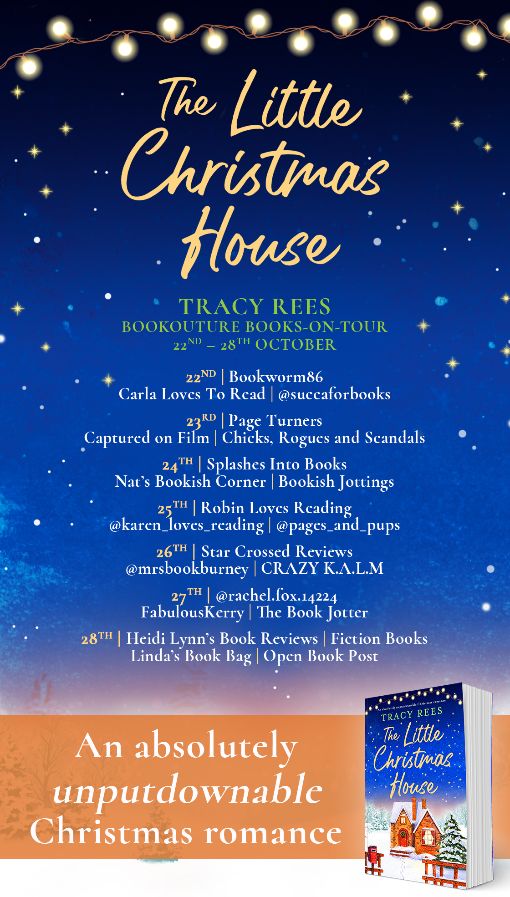 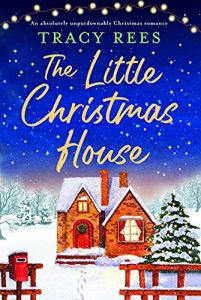 Thirty-year-old Holly Hanwell’s life is almost perfect – she loves her cosy little house in Hopley Village with its yellow front door and cute window seat, and adores teaching at the village school. But she’s secretly nursing heartbreak after her boyfriend dropped the bombshell of a century. He’s having a baby with someone else. It’s over.

Edward is trying to hold it together for his eight-year-old daughter Eliza after his wife abandoned them three years ago. Determined to give Eliza a new start, Edward has moved them to Christmas House at the edge of pretty Hopley, but with the walls literally falling down around them, has he made a terrible mistake?

With the most wonderful time of year approaching, neither Holly nor Edward really feel like celebrating. But holiday magic works in mysterious ways when Holly bumps into the handsome but troubled-looking single father of her newest pupil one snowy afternoon. Sheltering from the weather in the warm village café, they bond over delicious mugs of hot chocolate, topped with cream and sprinkles.

From then on, their paths seem to cross more frequently – Christmas shopping, the carol service and the nativity show. A friendship starts to blossom and, when there’s a crisis at Christmas House, Holly is the first person Edward calls.

But when a figure from Edward’s past returns, will their promising new relationship be over before it’s truly begun? And can Holly learn to open her heart again, before it’s too late? 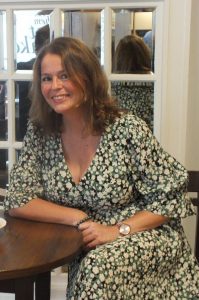 Tracy was born and grew up in Swansea, South Wales. An only child, she spent a great deal of time lost in
books, lost in her imagination.

She studied Modern and Medieval Languages at Jesus College, Cambridge, then moved to London and
worked in medical publishing for many years. Later, she earned a second degree, in psychology, at
London Metropolitan University, followed by professional counselling training in Wales.

She then became a counsellor for people with cancer and their families. She has also been a waitress,
bartender, shop assistant, estate agent, classroom assistant, university lecturer and workshop
leader.

In 2014 Tracy’s first novel, Amy Snow, won the Richard and Judy Search for a Bestseller competition and the Love Stories Best Historical Read award. Her third novel, The Hourglass, was shortlisted for the RNA Epic Romantic Novel of the Year award in 2017. Alongside her historical fiction, she now also writes contemporary commercial fiction.

Tracy and her partner divide their time between the Gower Peninsula in Wales and London.

“Holly Hanwell stood in front of the mirror, smoothing her festive, ivy-green satin dress over her hips. She’d gone full sparkles with her jewellery in honour of the occasion, outlined her brown eyes with a moss-green eyeliner and left her golden hair loose and wavy. The hotel-room door was ajar behind her and she could hear music wafting faintly up from the rooms below – the velvety tones of Johnny Mathis singing about the birth of a special child. Her hands drifted to her stomach and rested there. What did life have in store for her and Alex?”

“Sometimes in life there are those days when everything goes just right. You feel good, the sun shines and any worries just fade away. Days of ease. Today was not one of those days”

“But love makes you do lots of stupid things, and rash promises are the least of them”

“His daughter sat up straight. He rarely called her sensibly by name, so she would know right away that it was something important”

“She knew, somehow, that everything was going to be alright. She wished she could make him see that too but grown-ups needed explanations for everything if they were to believe it. They didn’t seem to just know very often”

“Holly wasn’t bothered about being PC – the impulse to challenge assumptions and give the children new perspectives came from deep in her heart. She never wanted a single one of her children to feel inadequate or wrong or barred from something that they really wanted to do”

“But I don’t want her to grow up trading on her looks, thinking she has to be pleasing to the eye to be worth anything. I don’t want beauty to be a currency for her”

“Two broken hearts. A beautiful old house. And a Christmas to remember…”

Okay! So here I am in heatwave September, reading my first Christmas book of the year, ready for its October Blog Tour, and loving it!

I am really not that much of a seasonal reader anyway, so even when I am not on a Blog Tour mission, you will often find me checking out books from my Kindle list which seem completely at odds with the time of year.

Yes, as well as that gloriously festive cover art, there are other obvious references alluding to the season. However they blend well into the overall storyline, not overpowering it to any great degree, making this a lovely feelgood read for any time of year. After all, there are Christmas shops open on the high street all year round, so why not Christmas books?

Author Tracy Rees, has a delightfully effortless way of storytelling, which is immersive and relaxing, textured and rich in atmosphere, compelling and obviously written from the heart. The charming location exudes a calming aura of peace and serenity, conducive to the healing, soothing balm, which Holly and Edward, both recent newcomers, are seeking as a new beginning to rebuild their fractured lives. That and copious amounts of hot chocolate, which seem to be another prerequisite for mending a broken heart these days.

Whilst the community collectively takes Holly, Edward and Edward’s young daughter Eliza, to their hearts, there is one special person who appears in each of their lives to add that extra special layer of welcoming kindness and understanding. Phyllis and Pamela, matriarchs of the delightful Hopley, know just what to say and do, but more importantly, when to say and do it. They are a steadying influence, a shoulder to cry on, a fountain of all wisdom in matters of the heart and are the first to extend the hand of friendship to their respective new visitors.

For Eliza, her father and his unquestioning love is all she really needs, until Holly, who is her new primary school teacher, bounds into her life and within a very short time, her heart. Eliza is a girl who has had to grow up more quickly than most other children of her age, so she confidently knows her own mind, although she always considers other people’s feelings before consciously making her decision, especially if that person is Edward, as she cherishes and values his happiness above all else. Eliza and Edward both take to Holly in an instant and the feeling is mutual, so it is little surprise at just how effective Eliza can be at manipulating and orchestrating a situation and she certainly has guile and maturity beyond her years when she puts her mind to the task.

Tracy does throw a couple of curved balls into the mix of this multi-layered storyline, including one or two people who seem hellbent on damaging the obvious attraction which is blossoming between Holly and Edward. However, a firm but fair Edward, manages to deflect opposition with consummate ease and always so very tactfully, without ruffling too many feathers. He really is a too good to be true, dream catch, if only Holly and he were to feel the same way about each other, with or without Eliza’s help.

The fusion between plenty of assured, observational and descriptive narrative, having been skilfully and seamlessly woven together with some excellent conversational dialogue, makes for a contemporary, easy to escape into storyline, which has great depth and range and offers a genuine sense of time and place.

The cast of lovingly drawn, engaging and well developed characters are reliable, authentic, easy to connect with and relate to, sharing some great dynamics, energy and synergy between them. It was so easy to imagine that I was listening to them telling their own story, as they have been given such a strong and animated voice, by an author who is clearly confident in the imagery her words can conjure up.

I read for a whole range of reasons, but among them are enjoyment, entertainment, escapism and emotion. This story soundly ticked all those boxes and more besides. It is the first book by author Tracy Rees I have read, however having now checked out her extensive portfolio of excellent titles and storylines, I definitely aim to be adding many more of them to my ‘wish list’ very soon! 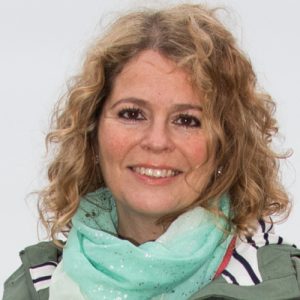