The Railway Girls In Love
by Maisie Thomas
Review 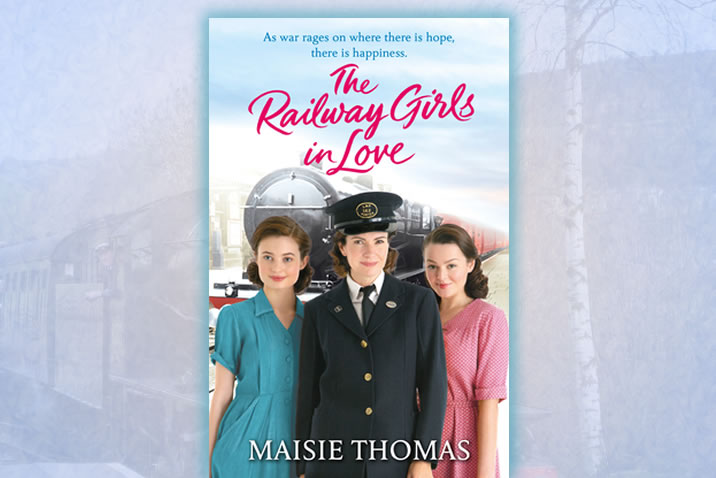 THE RAILWAY GIRLS IN LOVE – (The Railway Girls Book #3)

Love is in the air, and together the railway girls can overcome even the hardest of times.

Mabel has finally put the past behind her, and her relationship with the dashing Harry is stronger than ever. That is, until an old flame shows up, leaving Mabel questioning her future.

Meanwhile Joan has made amends with Bob – if only she could do the same with Gran. And there’s still that family mystery she wants answer to, isn’t there?

As a mother and grandmother, Dot Green has always put her family first. Her job as a parcels porter has brought new purpose to her life, so is it finally time to start following her heart . . .

Life as a railway girl is busy but as war rages on and air raids disrupt daily life, the women realise they need each other more than ever, especially when there might be wedding bells on the horizon

“With her gloved hands thrust into the big patch pockets of her rust-coloured wool coat, and her scarf wound snugly around her neck and tucked in beneath the wide lapels, Mabel Bradshaw tramped along, lifting her feet clear of the thick snow so as not to let it spill over the tops of her calf-high galoshes. The benefit of wearing two pairs of thick socks over her stockings wouldn’t last long if they got wet. Beside her, Althea her best friend, matched her pace”

“Be friends with one another – regardless of age or background or anything else that would normally come between you. If you can turn to one another for support, it will help you all”

“That’s the trouble with death.’ said Persephone. “It doesn’t happen at a time that’s convenient for all concerned, with everything neatly wrapped up. It happens right in the middle of things”

“I like the sound of that. “Our girls”. When I joined the railways, I didn’t want to end up being a substitute mum to my younger colleagues. I do enough running around after others at home. But it hasn’t been like that. I don’t feel like a mum to the youngsters, but I do want to watch over them”

“The power of upper-class expectation was indeed a wondrous thing”

“Family and friendship. What could matter more?”

“As war rages on, where there is hope, there is happiness”

Once again there has been a delay of several weeks between me being able to schedule in this book, and my review of the previous episode in The Railway Girls series. However as usual, I just knew that I had no need to worry, as Maisie fills in all the backstory gaps within the first few pages, without it feeling as though she is repeating herself, for any of her dedicated series readers. It’s just like catching up with old friends, when after those first few minutes of routine homely enquiries, you can get down to having a good chat and gossip, as if you had never been apart. The pages to the short, seamless chapters, simply turned themselves and passed by in the blink of an eye, leaving me surprised at just how short a distance on the physical timeline I had actually travelled – There was never a dull moment in this instalment of a series which just keeps on giving and getting better!

The Railway Girls series, which is set during WWII, seeks to highlight the extra burden placed on the women left at home, who not only found themselves working full time during the day in order to fulfil some of the roles of the men who were away fighting at the front, but who also in many instances were also carrying out voluntary first aid and fire warden duties in the evening. All this whilst the men who also remained behind, still also expected them to care for the family, doing all the household chores and queueing for hours to shop during rationing, as that was still considered ‘women’s work’.

However their story never comes across as ‘preachy’ or ‘whiney’, just some wonderfully shared, intimate and personal accounts of what are fast turning into the shooting seeds of changing times, by a small group of such women, who previously, in more ‘normal’ times, would probably never have met, let alone become firm and devoted friends, but who have now been thrown together by circumstance and necessity. War certainly has a way of breaking down all the barriers, including age and class, creating a level playing field, and just two years into what would turn out to be a very long campaign, this cosy band of sisters, are not only busy juggling a multitude of of ever-changing and evolving work-life and domestic projects and disasters, but even have a little time to contemplate matters of the heart, as an escape from contemplating what tragedies might still lie ahead of them, simply living for the day in the best way they can.

After one of the group, Joan was left staring down the barrel of a potentially life-changing decision, the stars came out in her favour and so too did her fairy godmothers! Despite the trials and tribulations you would expect from organising such an event as a wartime wedding, as air raids pound them nightly and anything with the potential to go wrong probably will; led by the elder ladies, who are totally used to the idea of ‘make do and mend’, Joan’s friends rally round her and Bob, to give them a day to remember. For the remaining youngsters in the group, fledgling romance is still in the air, and failing any more personal tragedies and casualties of war, I’m sure that more wedding bells will be heard ringing very soon.

Age is no barrier to love, as the matriarch of this close-knit group is about to discover, although true to the ingrained social mores of the time, she chooses to deal with her nemesis alone and discreetly. For Dot, who became a wife and mother whilst she was still but a girl herself, the independence she has been afforded by her war-work, is very much a poisoned chalice in the moral dilemma she is left grappling with. After much soul searching, she is forced to value what she has and stands to lose, against that which she might gain and whilst the scales tip neither one way nor the other conclusively, we are left to discover whether she ‘does the right thing’, or follows her heart.

Maisie has created and brought to life, a well developed and individually moulded cast of characters, given them a strong voice with which to tell their tale and who totally owned this storyline. They were often complex and emotional, raw, passionate and sometimes vulnerable; but always totally authentic , genuinely believable and completely engaging. The dynamics and synergy between them, makes them easy to connect with, as a whole community I could totally invest in – even the rather dour, po-faced figure of Gran Foster!

A well crafted and structured, completely immersive reading experience, written by an author who is totally in tune with her characters and skilled in the imagery of words, affording excellent visual depth to the narrative of the story. Maisie never forgets those unscripted moments though, those which are filled with spontaneous heart and humour and which she compassionately captures to perfection. Given the times the railway girls are living in, this is a wonderfully perceptive and strangely comforting story to escape into.

This multi-layered story, is a work of  cultural and societal fiction, which is replete in factual detail and social commentary, with an acute sense of time and place. Rich in atmosphere and beautifully textured, this series is wonderfully detailed homage to the ‘Home Front’ of the war effort, here in the UK.

A complimentary kindle download of this book, for review purposes, was made available by the author.