I grabbed a download of this book from NetGalley, when publisher, Lake Union Publishing allocated a certain number of copies on a ‘Read Now’ basis.

My thanks to everyone for the opportunity to review this lovely story.

THE SKYLARK’S SECRET by FIONA VALPY 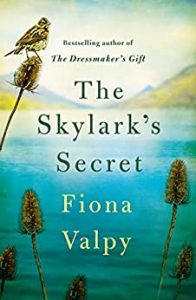 Loch Ewe, 1940. When gamekeeper’s daughter Flora’s remote highland village finds itself the base for the Royal Navy’s Arctic convoys, life in her close-knit community changes forever. In defiance of his disapproving father, the laird’s son falls in love with Flora, and as tensions build in their disrupted home, any chance of their happiness seems doomed.

Decades later, Flora’s daughter, singer Lexie Gordon, is forced to return to the village and to the tiny cottage where she grew up. Having long ago escaped to the bright lights of the West End, London still never truly felt like home.

Now back, with a daughter of her own, Lexie learns that her mother—and the hostile-seeming village itself—have long been hiding secrets that make her question everything she thought she knew.

As she pieces together the fragments of her parents’ story, Lexie discovers the courageous, devastating sacrifices made in her name. It’s too late to rekindle her relationship with her mother, but can Lexie find it in her heart to forgive the past, to grieve for all that’s lost, and finally find her place in the world? 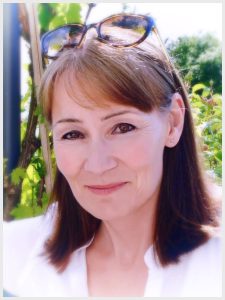 Fiona is an acclaimed number 1 bestselling author, whose books have been translated into more than twenty different languages worldwide.

She draws inspiration from the stories of strong women, especially during the years of World War II. Her meticulous historical research enriches her writing with an evocative sense of time and place.

She spent seven years living in France, having moved there from the UK in 2007, before returning to live in Scotland. Her love for both of these countries, their people and their histories, has found its way into the books she’s written.

Keep up with all Fiona’s latest news at her website

“It’s one of those days, on the cusp of early summer, when the sky and the sea alike are awash with sunlight. Days like this are rare enough up here in the Scottish Highlands to be remarked upon and stored away in the memory, hoarded as talismans against the long darkness of winter”

“I run the tip of my finger over the outline of my mother’s face, gently tracing the contours of her smile. Yes, I think, my dad must have been the one behind the camera. Because I know how much she loved him. There was no one else who could have made her look that way”

“She gazes out across the darkening waters of the loch for a moment, considering. Then she says, ‘No, Lexie. I wasn’t angry that you left. I was angry because you came back.’ She looks me squarely in the eye. ‘You were my hope, you see. The proof that there was a world out there, and it might not have been one that I could ever have been part of but you still linked me to it, even after we lost touch.”

“I think of my mum and the Carmichaels and all those other people who lost so much in the war. They were a generation who had to get used to goodbyes. I realise how fortunate I was to be born just as the war ended. into a generation that knew only the optimism of a peace-filled future”

“The four of them were able to breathe again. But their thanksgiving was muted, overshadowed by the image of more lives lost with the sinking of the enemy battleship. For they knew that the graveyard of the ocean deeps was a lonely one, with ice floes in the place of headstones and only blank-eyed sea creatures there to watch over the bones of lost sailors from both sides of the divide as they were stirred by restless currents”

Oh Heck! Why is it that all these amazing 5 star books I am reading just lately, involve copious amounts of tissues and many tears! Although I really should qualify that a little, to say that by the end of the story, the balance between tears of sorrow and tears of joy, had been somewhat restored!

This is a story within a story and to be honest, either of them would have stood up to individual, independent scrutiny and still come away rated highly by me. Together, they inexorably drew me in and took me on a unique journey, far away from my home, to another pace and way of life that to be honest, I didn’t want to leave behind when the book was finished.

Fiona has researched her premise well and thoroughly, so that whilst the characters and events described in the story are fictitious, they are all inspired by and based on, true events which took place at Loch Ewe during WWII, its connection to the Russian Arctic Convoys and its transformation to a busy naval base and home to thousands of allied military personnel from around the world.

Sure to get under the skin of even the most seasoned reader, The Skylark’s Secret, stirred my spirit and honed all my senses, so that right from the word go! I could imagine myself  in the remote crofting village of Aultbea, on the shores of Loch Ewe in The Scottish Highlands, both in those saddest of war-torn years and in the 1970s of Lexie’s homecoming! For me, a well blended mix of fiction and non-fiction in the storyline, offered a more rounded, textured reading experience and the well balanced mix of past and present, secret within secret, struck the balance perfectly between romance and history, tradition and humour.

This multi-layered, well-constructed story, is beautifully written, almost lyrical in its detailing and visually descriptive narrative of the stunning Scottish scenery, blended seamlessly with its overnight transformation to busy naval base, with all the ensuing upheavals, disasters and heart-breaking moments this brings with it; always of course balanced with some fun and laughter to ease the stresses and tensions away. Fast forward to the 1970s, when peace has once again been restored to this sleepy village, and it becomes a haven and refuge for Lexie and her baby daughter Daisy, as they return to the cottage of Lexie’s youth, to reminisce and discover her true heritage, heal mind and body to find a new sense of belonging, away from the hustle and bustle of the London lights.

From an author who is clearly an effortlessly consummate and compelling storyteller, who commands the pages with total authority and confidence, this profoundly touching, dual timeline story is seamlessly and fluidly narrated in two voices, in alternating chapters, by Flora and her daughter Lexie.

For Flora this is a story of growing up with her father and brother in the keepers cottage of the Ardtuath Estate, where life is simple for both children and the son of the Lord and Lady of the Estate, Alec. Romance blossoms and the added power of friendship between Flora, Bridie and Mairi, makes this small group formidable allies in peace and war. Flora has a benefactor in Lady Helen, however social mores and traditions run deep and dark in the eyes of Lord Charles and when forbidden fruit means that those ‘class’ lines have been irrevocably crossed, the consequences are disastrous for so many.

Lexie hopes to fill in some of the blank pages from a childhood which was only ever she and her mother, with her many unanswered questions being met with a stony wall of silence. Flora’s friends Bridie and Mairi are still alive and reluctantly agree to fill in any gaps in her own and Lexie’s history, although it transpires that not even they have all the answers. Lexie reconnects with people she had turned her back on, when she had left this safe haven for fortune and fame, coming to appreciate what a blessing genuine friendships are and how home is always where the heart is.

The exquisitely well drawn and developed characters, are all easy to connect with and become invested in, as there is a genuine synergy between them, despite the obviously inevitable ‘nosy neighbour’ syndrome of small village life. War has only served to make them a stronger community and defined their sense of purpose and future, so that although they still hold on strong to many of their core traditions, including their love of music and the sea, they are open to new blood being introduced to their streets and working as old and young together, finding new ways to blend old beliefs with modern ideas.

There is one constant presence throughout the story of both Flora and Lexie, who comes to play a pivotal role in providing the final missing piece of this jigsaw puzzle. Will this make or break them? A delicious mix of character and story driven writing, which left me holding my breath, with my fingers crossed, until the very last page.

A complimentary download of this book for review purposes, was kindly made available by the publisher, via NetGalley.