My thanks go out to the lovely Amber, representing Midas PR, for securing my spot on this Blog Tour and for this amazing Blog Tour Banner. 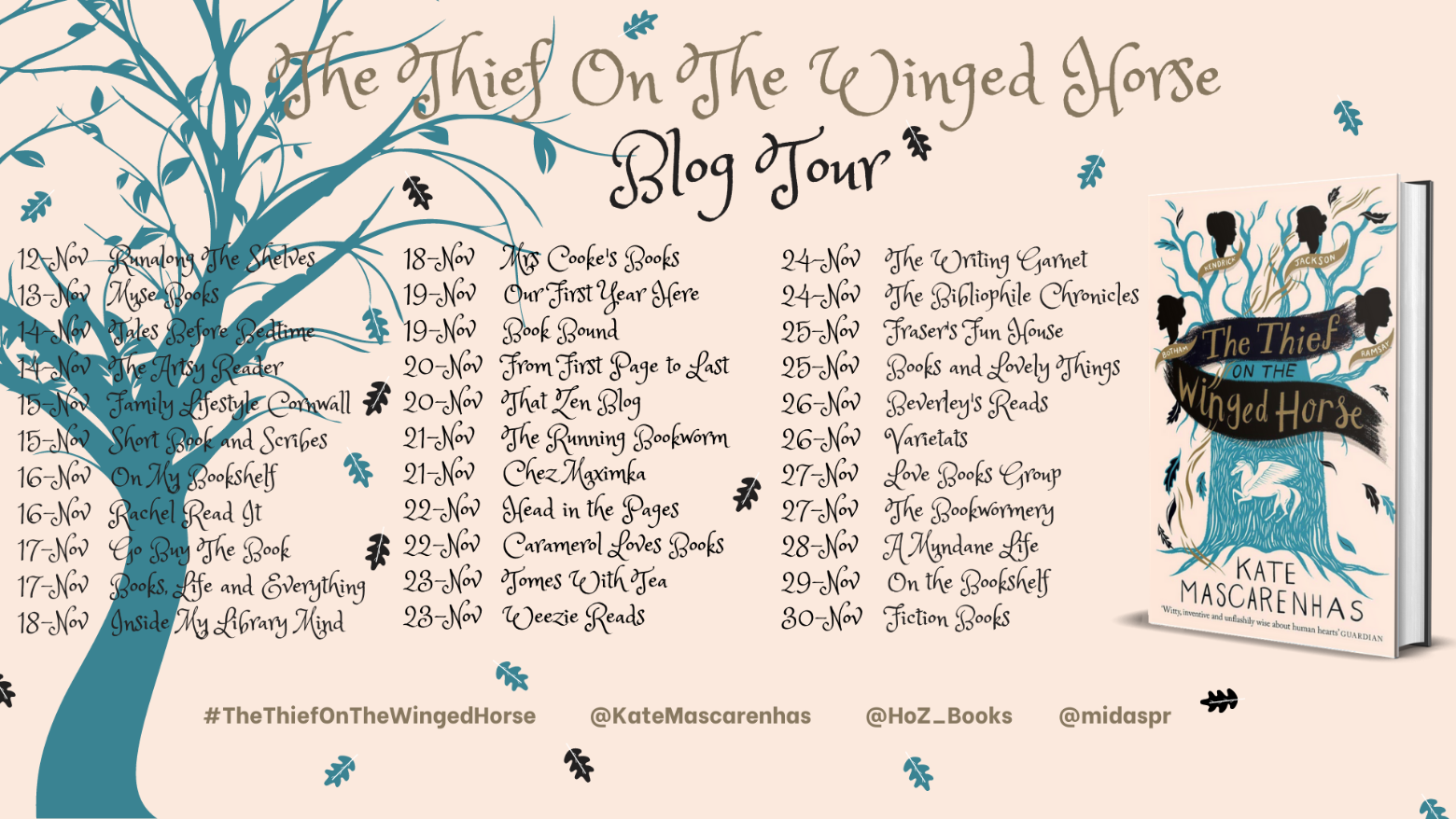 THE THIEF ON THE WINGED HORSE

The Kendrick family have been making world-famous dolls since the early 1800s. But their dolls aren’t coveted for the craftmanship alone. Each one has a specific emotion laid on it by its creator. A magic that can make you feel bucolic bliss or consuming paranoia at a single touch. Though founded by sisters, now only men may know the secrets of the workshop. 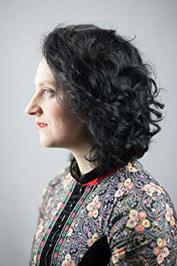 Born in 1980, she is of mixed heritage (white Irish father, brown British mother) and has family in Ireland and the Republic of Seychelles.

She studied English at Oxford and Applied Psychology at Derby. Her PhD, in literary studies and psychology, was completed at Worcester.

Since 2017 Kate has been a chartered psychologist. Previously she had been an advertising copywriter, bookbinder, and doll’s house maker.

She lives in the English Midlands with her partner.

“The most challenging thing about writing a book is sending it out into the world. I enjoy all stages of researching and drafting and editing. But once it’s published, it belongs to everybody else.”

MEMORABLE LINES FROM THE STORY

“Wealth had made him a poor judge of other people’s motivations and reactions. So often, money had allowed him not to care how other people felt at all.”

“Happy is as happy does, my brother. If she dwelled on her misfortunes less, then less misfortune would befall her.”

“Persephone believed that feelings were, in themselves, neither positive or negative – it was a matter of balance, and what use feelings were put to in one’s dealings with the world.”

“I don’t imagine having children. If they were dull-witted I’d be disappointed and if they were clever I’d be jealous. As clever as me, but no cleverer.”

“But babies grew up, and they were damaged en route to adulthood. People replicated the parenting mistakes of their childhood. She might turn out like Briar, one day. And if she already had children it would be too late. You couldn’t melt them down and start again if you made an error, the way you could with wax dolls.”

“Love hardly ever happens. Most people are only presenting a reasonable facsimile of the thing, and they know it’s not real, it’s just an act we’re all agreed on.”

‘A dazzling mixture of crime, romance, magic and myth.’

Okay! So do I get the one and only niggle out of the way first, or do I slip it in unnoticed amongst all the many genuinely good aspects of this storyline and writing? No, I need to say it out loud and then move on and not revisit it! You therefore need to read my review in its entirety to ascertain my true feelings about the book.

The Thief On The Winged Horse, it transpires after my reading just a few pages, is a contemporary fantasy story.  However, as I first began reading, the style of dialogue and narrative, and the initial perception I formed of the characters, would have quite firmly placed it as a work of historical fantasy fiction. Based on the early background story building and description of the physical eyot itself, together with the introduction of the families who lived there, I have to be totally honest and say that is also where I still think the book firmly belongs and where the slightly gothic undertones it engenders, would have made more impact from my perspective, as I found it quite difficult to assimilate those early beliefs with the modern day actualities as they were introduced into the narrative.

All that said, I enjoyed author’s fluid style of writing, rich in detail, with some beautifully descriptive narrative and dialogue, which really drew me into the story and engaged me with the individual characters, combined with a slow building plot which had more twists and turns than enough. Kate has created a book which has some good structure to it, with meaningful opening and closing pages and a multi-layered, engaging and interesting, although slightly disconcertingly quirky storyline, which quite honestly freaked me out on a couple of occasions, but that is because of my own personal phobia about certain kinds of dolls!

First, that slightly scary, original and intriguing storyline, which features hexed dolls, made in a variety of materials, each having individually installed ‘enchantments’ that can engender unique and often troubling feelings in their owner. Definitely made for an adult market, which it even more eerily transpired, was predominantly male. Made even more disconcerting when I discovered that the craftsmanship which went into creating the individual dolls and the secret of laying on the hex, was also a male led domain. However the company itself had an all female history, as it had originated as the brainchild of the four Kendrick sisters. Somewhere along the way, their male heirs had purloined and dominated the rights to become the ‘sorcerer’s’ of the business, leaving their womenfolk to create and furnish the doll’s houses and serve in the shop. The scene setting throughout the book is really well described, making it a very visual and immersive journey, which is multi-layered and complex.

It would also seem that the entire population of the eyot were descendants of the original Kendrick sisters, with new blood being introduced on a regular (but not too regular!) basis, through marriage. I can recall no mention to speak of about any children and if there were, they were definitely of the ‘seen and not heard’ variety. It is unclear just how the shift in the balance of power from a female dominated business, to that of almost total male superiority came about, with the business for the purposes of the story, being currently administered, but not actively worked in, by Conrad, who inherited the entire estate at the expense of his twin brother, Briar. Therefore, there is no love lost between the siblings, although both are carefully and subliminally manipulated by the respective females in their lives, Conrad’s companion, Hedwig and Briar’s daughter, Persephone, who are also not natural allies, but have a common goal and destination to aim for, with a combined strength and determination to get what they want.

In this slightly uncomfortable environment, which I found disturbingly intrusive and stifling, even in my third party reading, business secrets are jealously guarded against outsiders and a strong belief prevails about ‘the thief on the winged horse’, who regularly steals things and demands payment and gifts in exchange for their return! Kate masterfully crafts and creates a great sense of atmosphere about the entire island, which would make you frightened to step out of line and dreading the consequences if you were caught. There is no lightness or joviality to life on the eyot, where suspicion is an almost default ‘enchantment’ amongst this strange extended family concern, who avidly guard their way of life.

They do say however, that ‘Hell hath no fury like a woman scorned’ and this is also very much a story of revenge, retribution and the power taken by two of the female family members to fight back against the male domination, against all the odds; taking back piece by piece, some levelling out, if not control, of the Kendrick empire, by whatever means and feminine wiles necessary. Risking everything, Hedwig and Persephone somehow manage to rally some of the other women to stand up to their menfolk, be counted and have their voices heard, thus redressing the balance and hoping to drag the name of Kendrick into the 21st Century.

Whilst all of the main protagonists are very powerfully drawn and developed, with a genuine depth of character; none of them are really quite what they seem, all being most dislikeable and disagreeable, with their thinly veiled hidden agendas and motives, which are very cleverly woven into the plot, one on top of the other, so that I was never exactly sure who was fooling who, and which one of the suspects was in cahoots with the other at any given point in time. Such was the nature of their various and nefarious crimes, including industrial espionage, blackmail and theft and those just for starters and the tip of the iceberg, they were switching allegiances and plotting one against the other, almost constantly, making none of them easy to connect or empathise with, although the instant interactions between them were very compelling and addictive.  Long held secrets bubble to the surface, which affect the characters of Hedwig and Persephone the most, revealing their vulnerabilities, and their individual desperate searches for a sense of place and belonging, whilst at the same time bringing their individual strengths to the fore,  with a uniquely feminine recognition and intuition, that they needed to collaborate together to achieve their common objectives.

This powerful, mature and masterfully written story, certainly took me on a journey well outside of my usual comfort zone, although with its dark undertones, male dominated and toxic relationships, I’m not sure whether I was in a happy place or not. A very unusual, almost magical and immersive storyline, but the thought of all those spooky dolls out there, makes me think that I will never quite look at Oxford in the same way again!