This is another of those rare times when I am sharing the review as my post on the Blog Tour for this book. Once again, I have also rather stepped out of my comfort zone when reading The Treadstone Resurrection, although as previously on such occasions, I was more than surprised at just how much I enjoyed the experience!

I have to thank the teams at Head Of Zeus and NetGalley for the seamless download of the book, whilst on this occasion the team at Midas PR, did a great job at organising the Blog Tour. 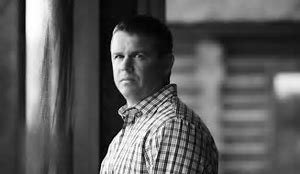 Joshua graduated with an English degree from the University of Memphis, before joining the military and spending five years in the 82nd Airborne Division.

He was a team leader in the 3-504 Parachute Infantry Regiment in Iraq from 2005-2006 where he conducted combat operations in support of Operation Iraqi Freedom.

From 2007-2008, Hood served as a squad leader with the 1-508th Parachute Infantry Regiment in Afghanistan where he was decorated for valour in Operation Furious Pursuit.

On his return to civilian life Joshua was a sniper team leader on a full time SWAT team in Memphis, TN, where he was awarded the lifesaving medal.

He quit SWAT and the Police Department the very day his son was born, knowing he couldn’t bring that “trash” home to his family. He now lives in Collierville, TN, with his wife and son, where he is a full-time author.

Currently he works as the Director of Veteran Outreach for the American Warrior Initiative.

Check out all the latest news on Joshua’s website

“I feel that readers trust me to give them something new – something real they haven’t already read a hundred times. Writing isn’t just a job for me, it’s a profession. I have a deep respect for the craft and the genre. I always work hard to get it right!”

“Writing saved me. If I can be redeemed, anyone can. It’s like therapy. There is no gift to writing or life – it’s just hard work. I could have very easily stayed in a ‘normal job’ but it wasn’t good for my soul.”

You can read the full interview with Joshua by visiting the “Under The Hood” page at his website.

“When he trusted his legs to hold him, Hayes grunted to his feet, placed the pistol on the bedside table, and padded across the hardwood to the bathroom. He palmed the wall switch and the overhead lights flashed to life, revealing the mass of scars that crisscrossed his bare torso like lines on a topographic map.”

“Hayes had been here before, wounded, alone, and on the run. Wanting to quit, but unable to, thanks to the mind job the Treadstone docs had done on him.
Survival: It was the only thing that mattered.
And revenge, the voice reminded him.”

“But he knew that no matter how many threads he cut or how far he moved, there would always be one set of records that he couldn’t touch: his file in the Treadstone archives.”

“Vengeance was the most powerful instinct.”

“He said that inside each of us there is a battle between two wolves. One wolf is good and wants to do good things. But the other, all he wants to do is destroy everything, tear you down, and keep you there until one day you can’t take it and you eat a bullet.” Hayes went silent and looked out over the flat scrubland, remembering the moment like it had happened yesterday. “Then what happened?” Boggs asked. “I asked him which wolf won,” Hayes said, getting to his feet and brushing the dirt off his knees. “And what did he say?” Hayes looked down at the man, his eyes playing over the red finger marks on his neck and the shame in his eyes. Like looking in a mirror, he thought, offering his hand. “He said the wolf that wins is the one you feed,” Hayes answered, pulling the man to his feet.

“With the pills finally out of his system, the conduit that connected Hayes to the training he’d received at Treadstone was wide open, and he reacted without hesitation, emotion, or thought. He was a machine, programmed for one purpose: to kill.”

You can check out the longer extract I shared for my ‘Teaser Tuesday‘ meme.

“All Killer. No Filler.”

I have never read any of the original Robert Ludlum series of Jason Bourne stories, however from my experience and observations of having watched the Bourne series of films many times, I am prompted to say that Adam Hayes, one of the new generation of re-awakened Treadstone operatives, operates at a whole new level of recklessness and ruthlessness.

I have also since discovered, that ‘Treadstone’ aired as an Amazon Prime series last year, so I guess that this book is just the opening instalment in what will be a whole new series.

I note that several of the posted comments and reviews, came from ex-service personnel, who are rather scathing in their views of the technical authenticity of the narrative, my own husband amongst them probably, should he ever choose to read the book.  However, having come at this storyline purely from an untrained civilian perspective, who was simply looking for a good action story, I enjoyed the ‘written word’ experience much more than I ever thought I would!

Everyone knows when they sit down to watch a Bourne, or any similar kind of all-action film, that they will be treated to a liberal dose of exaggerated action and dialogue and that some license will have been taken with the reality of any series of situations and events. However, despite being a little over-awed by the technical names and characteristics of so many firearms and weapons, and the multitudinous departmental acronyms, I found myself turning the virtual pages just as fast as I could, to see what happened next and how it all ended up for Adam!

Joshua is an author very much in his natural element, visually and descriptively writing in an area he knows all too well, drawing from his own experiences in the combat field, thus not getting too bogged down with having to plan plots and storylines and invent characters from scratch; seamlessly managing to maintain the perfect balance between plot and character driven writing, creating the combination of an emotionally complex character and a storyline where the air is crackling with tension from beginning to end.

Luckily for me, the chapters were short, taut, tense and therefore very ‘moreish’, so reading just one more on my way out of the door for work each day, was always doable!

This was a death defying, non-stop, action all the way, exhilarating adventure, which saw Adam having to dig deep into his reserves of skill, ingenuity, strength and stamina, just to survive each minute of the day, when death was so often just around the corner. Such was Joshua’s power of written characterisation, that all those desperately intense emotions were laid bare on the page, enticing me, the reader, in, gripping me and not letting me go until Adam himself was happy with the final moments of his mission, when there was a palpable exhalation of breath long held, a release of pent up tension, and my sweaty palms closed the pages of my Kindle.

Adam Hayes is an authentic, if very badly damaged character, both physically and psychologically, with a wife who was no longer able to cope and had left, taking with her his child, on whom he dotes, but rarely sees. He doesn’t want to get drawn back into his old life with Treadstone, but he has to put his personal demons aside, as he finds himself slipping back into it with ease, almost as though it is a comfort blanket which protects him from the ‘real’ world! In fact he begins to wonder at one point, in a moment of rage and frustration, when he is desperately emotionally drained, if knowing what Treadstone has done to him, is worse than not remembering!

The storyline is nothing if not predictable and involves just about all the elements you might expect; from drugs and money laundering cartels, to power seeking foreign regime leaders and homegrown corrupt politicians and government officials. However the joins which link these various elements are virtually seamless and the adrenaline pumped action flows freely, connecting all the many strands, without me having to spend too much time pondering on what the end-game might be. There was barely time for either Adam or myself to draw breath between the many surprises and twists and turns which awaited him, no matter where he went.

“You need four things to tell a story: a beginning, a middle, an end and you can’t be dead.”

If this opening book in the Treadstone saga is anything to go by, Joshua Hood has done and will continue to do, the memory of Robert Ludlum very proud!

Always remember – What makes reading so wonderful, is that for each book, every reader takes a different journey, uniquely their own! 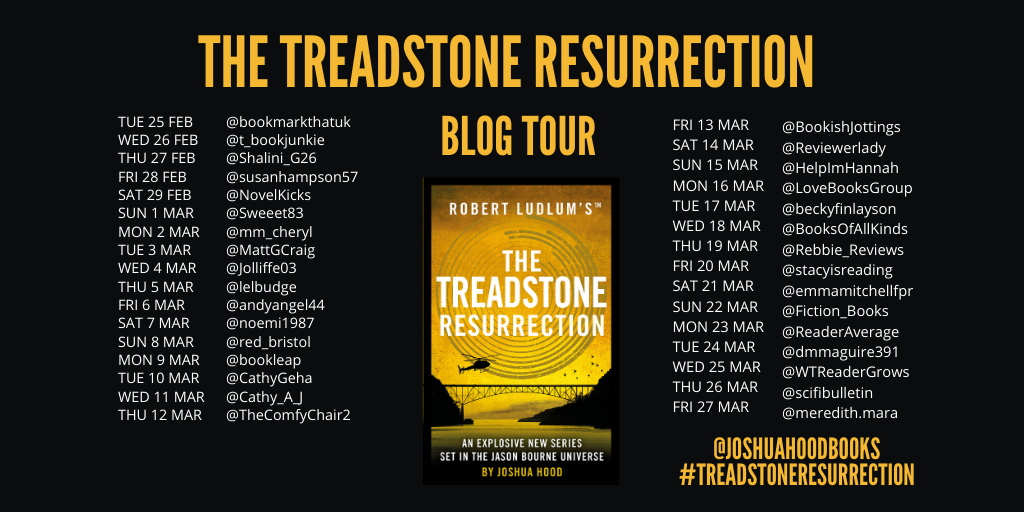