The War Child
by Renita D’Silva
Books On Tour
Review 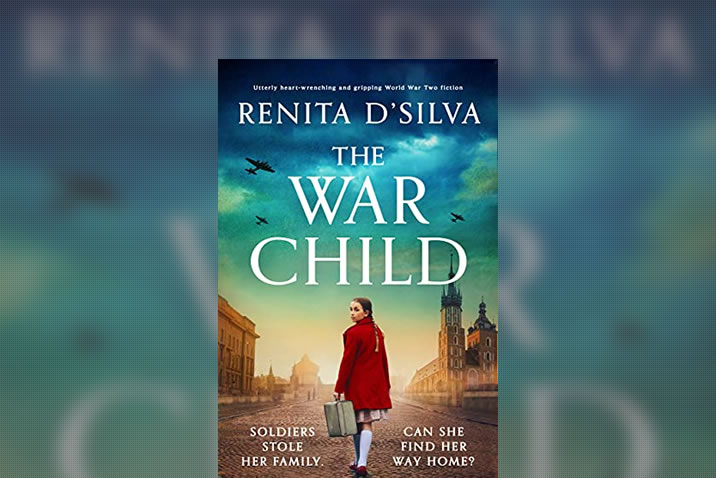 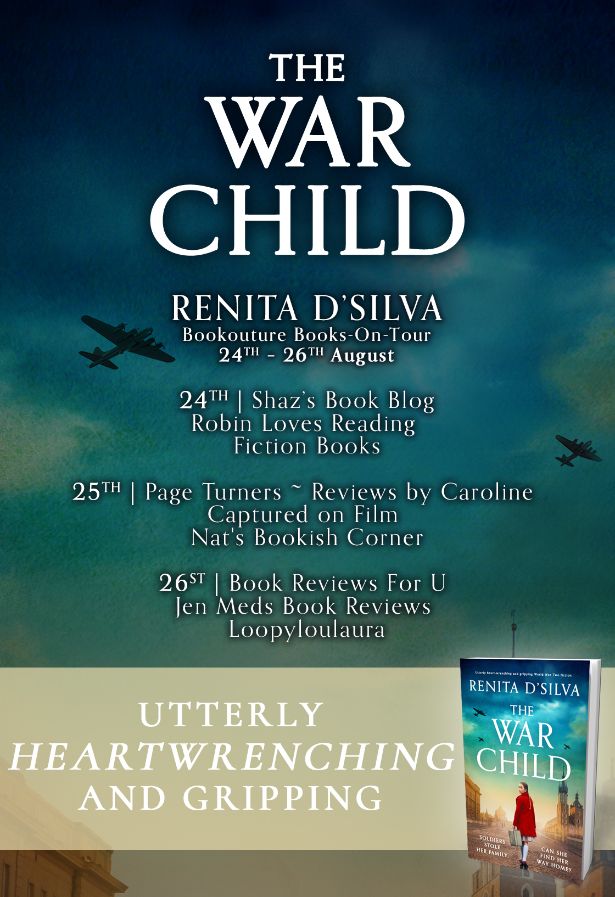 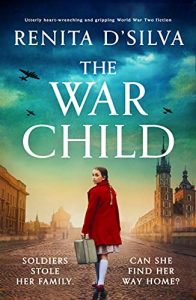 Her mother cradled Clara tightly as they crouched under the table in the basement. As the house started to shake, she took off her silver necklace and with fumbling fingers fastened it around her daughter’s little neck. There was a huge crash, louder than fireworks or thunder. And then her mother was gone.

Orphan Clara Knight is haunted by the memory of her house being bombed during the First World War – she was miraculously pulled from the rubble, finding herself all alone in a dark world. In the years that followed, she struggled to rebuild her life, desperately scarred by her childhood, finding solace in nursing and helping others.

When a tragically injured soldier arrives from Europe, hospital staff are fearful and will not touch him. But Clara grew up listening to her father’s memories of his time in India and offers to nurse him back to health. Day and night she cares for Anand Goel alone, and as they begin to share stories of each other’s lives, she starts to fall for him.

London, 1940. As war returns in earnest, Clara realises she is pregnant and the new life growing inside her provides a glimmer of hope. When her son is born, Clara sees her mother at last in his deep brown eyes. But as bombs begin to fall on the city, she cannot let history repeat itself. 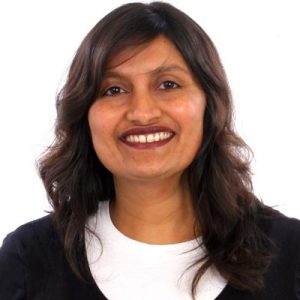 Renita D’Silva loves stories, both reading and creating them.

Her short stories have been published in ‘The View from Here’, ‘Bartleby Snopes’, ‘this zine’, ‘Platinum Page’, ‘Paragraph Planet’ among others.

She has been nominated for the ‘Pushcart’ prize and the ‘Best of the Net’ anthology.

She is the author of  several fiction novels, including ‘Monsoon Memories’, ‘The Forgotten Daughter’, ‘The Stolen Girl’, ‘A Sister’s Promise’, ‘A Mother’s Secret’, ‘A Daughter’s Courage’, and ‘Beneath An Indian Sky’.

“I think all fiction is a reflection of real life to some extent. I think as authors we take what intrigues us and weave it into a story. I think we – or at least I – tell stories to make sense of life, this terrible and wonderful world we live in”

“In my stories, I attempt to contrast the cultures and attitudes in India and the UK and explore the mindset of an immigrant, the question of displacement, the notion of belonging and the idea of home”

Keep up with all Renita’s news at her website

Clara is dreaming of a monster who growls and screams. ‘Stop!’ she yells, covering her ears with her hands. But it won’t listen. ‘Wooo, I’m coming for you,’ it howls. ‘Clara, wake up, my love.’ Her mother’s voice, soft but urgent.

Indira is hosting the directors’ board meeting and is in full flow, detailing her plans for the direction she wants the company to take in the next few weeks, when there is an unexpected, unprecedented knock at the closed door to the boardroom.

“Indira makes it her mission to be tough and take no nonsense – it is the only way to deal with the older men she has bypassed to get to this position regardless of their years of experience and their entitled, chauvinistic superiority. She leads by example and takes no fools. She is more ruthless than any of them”

“My Tom doesn’t hold with reading, says it fills your head with ideas above your station, and the boys are the same…”

“Clara holds her friend as she sobs, sobbing along with her, both of them casualties of a war that has stripped her of family, rendered her an orphan and returned to her friend a father she doesn’t recognise, devastated and tortured by what he has experienced”

“Love is a trap. It’s legacy – precious few glorious years to create treasured memories and a lifetime of pain”

“It is her fate to desire a man who loves someone else. To long for someone who will never be hers”

“The two boys she loves in a country she loves with people she loves. What is she doing here, all alone, in a war-battered city an ocean away?”

“Love. It is the most important, the only important thing”

OK! So first off you need to be warned that one of those small ‘handy’ packets of tissues is definitely not going to be enough to mop up all the tears you will shed over this book!

Now I need to know why I haven’t read any of this author’s previous books and how can I go about fitting them all into my crammed reading schedule, whilst allowing plenty of time to savour the scope and range of the storylines and the beautiful writing which demands to be read and digested slowly and at ease.

To pin this book down to one specific genre is so difficult, as it really is a sensory feast, which will evoke so many different emotions, whilst touching on a multitude of social and cultural mores: The strength and resilience of women; the enduring power of love and family; the prejudice of race and skin colour; the despair and desperation engendered by arranged marriages and polygyny; the hellish consequences of two World Wars on a single generation – The list goes on, yet each element is dealt with in a sympathetic but straightforwardly  honest way, as the many strands are carefully and cleverly woven together, until it is difficult to tell where one ends and another begins. Author, Renita D’Silva has a naturally lyrical cadence to her writing which, whilst it in no way diminished the impact she wanted her words to have about some very important issues, told the story in way which flowed and washed over me gently and with the lightest of touches, which belied the desperate intensity between its pages.

In the same way that most novels will either be predominantly character or plot driven, this storyline also adds an amazing third dimension, that of being location driven, offering up as it does, a strong and superbly detailed sense of time and place, which fully immersed me in its wonderfully described array of sights, sounds and smells, conjuring up a strong essence of its people, adding a lovely feeling of depth and range to the work. Whether it be the harsh realities of an English landscape torn apart by two wars, with its strong and stoic population somehow united in their inherent prejudice against race and colour. Or the stark contrast of an Indian society, divided by wealth and position, which holds women in little esteem as individuals with either minds or needs of their own. Armchair travellers will revel in the detail and visuality of the writing – and no need to leave the comfort of your own living room!

A vast, seamlessly multi-layered and exquisitely textured plot, which is rich in atmosphere, is lovingly delivered with authentic perception, consummate ease and total confidence, by an author who truly believes in her storyline and is totally invested in the cast of characters she has created to tell it. Well defined and developed, sometimes raw and vulnerable, emotionally complex, addictive and animated, often searching for a sense of belonging, these were people I could totally connect with, relate to and invest in, even though the Maharaja was definitely one person I could love to hate!

A secret between two lovers kept until it could harm no more, this family saga which spans two World Wars, two continents, four generations and almost ninety years, as seen through the eyes of and told in the voices of a grandmother and granddaughter, Clara and Indira, is a beautifully structured storyline, which I didn’t want to end, as despite a natural conclusion having been reached, I still had so many unanswered questions, which would probably have doubled the length of the book and really would have been me just being plain picky and nosy.

For me, what makes reading such a wonderful experience, is that each and every story takes me on a unique and individual journey, so I strongly recommend you read this one for yourself and see where it leads you!