Through A Yellow Wood
by Carolyn J. Rose
Review

THROUGH A YELLOW WOOD 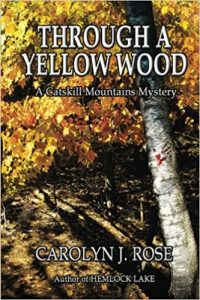 No longer wearing a badge and intent on rebuilding the family home and making a life with Camille, Dan feels an obligation of blood to Clarence Wolven, a distant relative.

He arranges the funeral and adopts the three-legged dog he names Nelson.

When the sheriff’s investigation stalls, Dan returns to the cabin with Jefferson Longyear. They feel the presence of Clarence’s angry ghost and Nelson bolts into the forest.

“I knew first-hand there was something to be said for having secrets laid bare and dissected. That process allowed for healing, closure”

“Times were simpler then and ignorance was bliss”

“If you can’t change it, find a way to cope with it”

“There are a hundred little forks in our roads every day and each choice can affect the next one. If we don’t think before we step, we might end up a long way from where we intended to be – from where we wanted to be”

THE ROAD NOT TAKEN by ROBERT FROST

Two roads diverged in a yellow wood,
And sorry I could not travel both
And be one traveler, long I stood
And looked down one as far as I could
To where it bent in the undergrowth;
.
Then took the other, as just as fair,
And having perhaps the better claim,
Because it was grassy and wanted wear;
Though as for that the passing there
Had worn them really about the same,
.
And both that morning equally lay
In leaves no step had trodden black.
Oh, I kept the first for another day!
Yet knowing how way leads on to way,
I doubted if I should ever come back.
.
I shall be telling this with a sigh
Somewhere ages and ages hence:
Two roads diverged in a wood, and I—
I took the one less traveled by,
And that has made all the difference.

On my return trip to the small, insular and inward looking community that is Hemlock Lake, I discovered that things had moved on since my last visit, yet at the same time life seemed to have stood still, as if waiting with baited breath for the next event which would shake the spiritless residents out of their apparent apathetic and lethargic state. Hemlock Lake harbours many deep and well buried secrets, which Carolyn offers tantalising hints at, although stripping away the many layers from the deep and complex characters she has developed, can be quite some challenge.

Following the previous year’s horrific incidents at Hemlock Lake and the treacherous lies and deceits committed against him by his own family, former police officer Dan Stone has decided to return to the place of his childhood permanently, to try and make a new life for himself and his partner, Camille. The relationship between Dan and Camille has blossomed and flourished after careful nurturing, although it is to be tested when the teenage children of the man who posed such a threat to them, just one short year ago, are left in the couples care by their cancer stricken grandmother. Dan and Camille, who are themselves about to become new parents for the first time, step up to the mark amazingly well, although Carolyn does a great job at making certain to include many of the challenges and accusations levelled at parents by their adolescent offspring, just to test their resolve and dedication, before each party declares mutual acceptance of the situation and the arrangement becomes permanent.

In the midst of this domestic turmoil, it isn’t long before Dan’s new found civilian status is tested. Once again, the murder victim is another member of his own family, albeit a distant one. So with blood being thicker than water, Dan feels compelled to become involved in the murder investigation, it has to be said, with the eager approval of his former bosses, who are never really destined to gain access to the inner sanctum of this close knit community, in order to gain its trust and cooperation. The suspects begin to pile up thick and fast and when things take a macabre turn for the worse, I was with Dan in wondering just how many murderers we were looking for and who the next victim might be! Especially when history seems to be about to repeat itself and Dan’s own new family is threatened.

I had a list of two or three suspects, but kept vacillating between them, with each new and more gruesome discovery and of course the many red herrings with which Carolyn liberally sprinkled the story. I did eventually select the correct suspect from amongst my candidates, but it was only a matter of pages before the big reveal, so it probably doesn’t count!

This complex and suspenseful story, woven around a relatively small group of people, highlights the best and worst of human nature, although whether or not because of Dan, Camille and a handful of residents who are eager to embrace change, attitudes perceptibly soften as events unfold, with emotions become less raw, despite the palpable fear amongst the community.

When Dan is able to help long term friend Jefferson Longyear, who had been an invaluable help and stabilising influence to Dan during the investigation, cement a future together with one of the most stubborn and defiant matriarchs in town, then you know that change is on the horizon!

In ‘Through A Yellow Wood’, Carolyn has got the balance between a character and plot driven storyline just right and she deals with the emotional aspects of events with great perceptiveness and pathos, whilst still maintaining a sense of objectivity and purpose.

Through A Yellow Wood, is the second book in the Catskill Mountains Mystery trilogy, with the final book The Devil’s Tombstone, waiting in line on my Kindle, courtesy of author Carolyn J. Rose.

Check out my review of ‘Hemlock Lake’, the first book in the series.

*All three books in the series work well as individual stand alone stories. 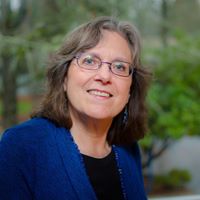 As this was an author invitation to read and review, a Kindle download of  Through A Yellow Wood was sent to me free of charge, by its author, Carolyn J. Rose.