This one caught my eye, so I grabbed it as part of my pre-approved status with author Aria/Aries Fiction and NetGalley

EVERY LAST FEAR by ALEX FINLAY 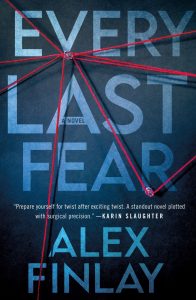 In one of the year’s most anticipated debut psychological thrillers, a family made infamous by a true crime documentary is found dead, leaving their surviving son to uncover the truth about their final days.

“They found the bodies on a Tuesday.” So begins this twisty and breathtaking novel that traces the fate of the Pine family, a thriller that will both leave you on the edge of your seat and move you to tears.

After a late night of partying, NYU student Matt Pine returns to his dorm room to devastating news: nearly his entire family—his mom, his dad, his little brother and sister—have been found dead from an apparent gas leak while vacationing in Mexico. The local police claim it was an accident, but the FBI and State Department seem far less certain—and they won’t tell Matt why.

The tragedy makes headlines everywhere because this isn’t the first time the Pine family has been thrust into the media spotlight. Matt’s older brother, Danny—currently serving a life sentence for the murder of his teenage girlfriend Charlotte—was the subject of a viral true crime documentary suggesting that Danny was wrongfully convicted. Though the country has rallied behind Danny, Matt holds a secret about his brother that he’s never told anyone: the night Charlotte was killed Matt saw something that makes him believe his brother is guilty of the crime.

When Matt returns to his small hometown to bury his parents and siblings, he’s faced with a hostile community that was villainized by the documentary, a frenzied media, and memories he’d hoped to leave behind forever. Now, as the deaths in Mexico appear increasingly suspicious and connected to Danny’s case, Matt must unearth the truth behind the crime that sent his brother to prison—putting his own life in peril—and forcing him to confront his every last fear.

Told through multiple points-of-view and alternating between past and present, Alex Finlay’s Every Last Fear is not only a page-turning thriller, it’s also a poignant story about a family managing heartbreak and tragedy, and living through a fame they never wanted.

Next I have to thank the lovely Noelle, representing publisher Bookouture, for flagging up the next instalment in this great series

Someone wants Jake Parker dead. He’ll find out why, or die trying…

Ex-army, ex-police, widowed husband, estranged son. Jake Parker has no family, no one to care if one of the government-contract jobs he takes goes wrong. So he’s shocked to get a phone call from his father as he’s pursuing an anomaly from his latest mission. But his dad isn’t calling for a chat, he’s issuing a warning: stop digging around, let this job go.

Jake barely has time to register the news that his father has been keeping tabs on him before a bomb tears apart his apartment, and he barely escapes with his life. Now he’s injured, on the run, and determined to find out who wants to silence him, and why.

The more he digs, the more drastic the attempts on his life become, but Jake won’t be beaten at this game. When he gets hold of one of the thugs trying to take him out, Jake learns that he’s treading on the toes of an illicit arms deal and now he may be the only person who can stop a cargo of weapons getting into the hands of international terrorists. Terrorists with their eyes on the US and who seem to have a hold on his father. Now Jake has to make the ultimate choice: allegiance to his family, or to his country…? He can only save one.

This beautiful paperback edition which I can see, smell and feel, was gifted to me out of generosity, by the author, for which I thank her! 🙂 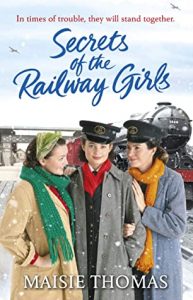 As the war continues and secrets threaten the railway girls, they will discover the true meaning of friendship.

For Dot, her job on the railways is everything. Transporting parcels around the country gives her pride that she is doing her bit for the war effort, but a growing friendship causes problems when home and work collide.

Joan loves her boyfriend Bob dearly, but when tragedy strikes, her heart is torn apart, and she is forced to make a decision that could hurt those she loves most.

Meanwhile Mabel has finally found a place to call home and her relationship seems to be going from strength to strength. However, the relentless bombing in the Christmas blitz is about to destroy everything she holds dear, and she will need her friends’ courage and generosity now more than ever.

Brought together by their work on Manchester’s railways, the three women find that with the support and encouragement of each other, they can get through even the most challenging of times.