I am really looking forward to reading this, my 14th Goodreads Giveaway competition win and the debut novel in a six part series, so I can get in right from the beginning and not need to play my usual game of catch-up.

The Grantchester Mysteries are moral fables in the tradition of G.K. Chesterton’s Father Brown mixing crime, comedy and social history. The series is set in the Cambridgeshire village of Grantchester (yes, this is a real place) and runs from 1953 – 1977 and as the son of a clergyman, it is not difficult to work out where James got the inspiration for the series from.

SIDNEY CHAMBERS AND THE SHADOW OF DEATH

Sidney Chambers, the Vicar of Grantchester, is a thirty-two-year-old clergyman with a difference: he is also a reluctant detective. Together with his roguish friend Inspector Geordie Keating, Sidney stumbles across a series of baffling cases: the suspect suicide of a Cambridge solicitor; a scandalous jewellery theft at a New Year’s Eve dinner party; the unexplained death of a well-known jazz promoter’s daughter; and a shocking art forgery, the disclosure of which puts a close friend in danger. Sidney discovers that being a detective, like being a clergyman, means that you are never off duty… 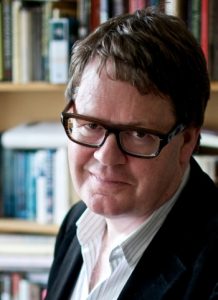 James Runcie is a writer, director and literary curator. He is the author of The Grantchester Mysteries, a Fellow of the Royal Society of Literature, Visiting Professor at Bath Spa University, and the Commissioning Editor for Arts at BBC Radio 4.

He was born in 1959, the son of Robert Runcie, the former Archbishop of Canterbury, and Rosalind Runcie. Educated at Marlborough College, Cambridge University and Bristol Old Vic Theatre School, he was a founder member of The Late Show, and made documentary films for the BBC for fifteen years. He then went freelance to make programmes for Channel 4 and ITV. He was Artistic Director of the Bath Literature Festival from 2010-2013, and Head of Literature at the Southbank Centre in London from 2013-2015.

James Runcie lives in Edinburgh and London and is married to Marilyn Elsie Imrie, a Scottish radio drama director and producer.

Check out all James’s latest news at his website

You can’t always enjoy writing. But you can enjoy having written.