This week’s new arrival on the scene, was a completely unexpected, but very welcome surprise from Janet Asprey at Bloomsbury Publishing. Still nothing can beat the look, smell and feel, of a brand new printed publication – Thanks Janet 🙂

I see that a few of you have already shared this one and I hope to catch some reviews in due course, to read what you thought about it.

A fatal explosion in the past. A series of brutal murders in the present. In the blazing Gibraltar sun, is justice being served for betrayals long hidden?

Gibraltar, 1940. A bomb explodes, killing two British soldiers patrolling the dockyards. A Spaniard is executed for the crime, yet protests his innocence to the very last.

Present day, and Spike Sanguinetti finds himself defending the violent and alcoholic Christopher Massetti in a harassment case brought against him by the wealthy and respected Dr. Eloise Capurro. Yet the case isn’t as cut-and-dried as it first seems and Massetti walks free. Only days later, Dr. Capurro leaps to her death from a blazing house fire before Sanguinetti’s very eyes. Sanguinetti spots someone else watching, someone hiding in the shadows. Massetti.

Spike starts asking questions that nobody seems to want answered. Soon, it’s not just the truth that’s at stake: it is everything and everyone that Spike holds precious.

As the Gibraltarian sun beats down relentlessly, crimes of the past and present collide, relationships are tested and long-buried secrets exposed. Who can Spike trust? And where do his own loyalties lie? 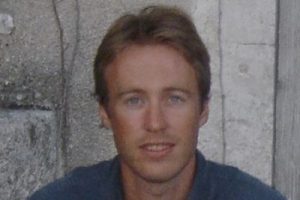 After reading Modern and Medieval Languages at Oxford University, Thomas went on to work as a journalist for ‘Time Out’ and a translator for the European Parliament and UEFA Champions League. Whilst training to be a lawyer, he looked into practising abroad. Instead, he decided to write a series of thrillers set in Gibraltar and the wider Mediterranean.

The preceding four novels in the ‘Spike Sanguinetti’ series, Shadow of the Rock, Sign of the Cross, Hollow Mountain and Sleeping Dogs have all been published by Bloomsbury and to critical acclaim.

Thomas was shortlisted for the CWA Debut Dagger Award for best new crime writer of 2013.

He is married and lives with his family in London.

To those who dismiss crime fiction as beneath literary, Thomas replies that there’s plenty of crime fiction that can rival classic fiction, and that the distinction is fairly futile anyway. “As long as the characterisation is strong, and the writing is fresh and truthful instead of lazy or clichéd, it doesn’t matter what genre your book falls into: good writing is good writing.” Crime fiction is highly versatile, he adds: “Most books contain a crime somewhere in the plot. From ‘Jane Eyre’ to ‘Oliver Twist’, find me a classic that doesn’t!”

Written by Yvonne
14 comments
“It’s Monday! What Are You Reading?”
FacebookTwitter
‘The Devil’s Country’ By Harry Hunsicker

An absolutely beautiful, emotional and unforgettable read that will sweep you away to a gorgeous Scilly isle... 💙

Memories of the Cottage by the Sea by @RebAlexander1 is now available to request on #NetGalley!

If you’re looking for a mind-blowing thriller that will keep you on your toes, we’ve got you covered!