So why not stop by, leave a link to your own Mailbox Monday post, oh! and don’t forget to leave a comment for Yolanda, after all, we all like to receive them!

This Kindle download, received direct from the author, has enabled me to go right back to the start of this charming, feel-good tale, with the first episode, ‘The Cuckoos Of Batch Magna’. There have been a total of three stories told about the disparate, eclectic mix of characters who live in this slow-pace of life, fictional paradise, with the fourth installment still very much a work in progress.  This book and come to that, the entire series, seems to have garnered worldwide praise from everyone who has read it, with almost wall-to-wall 5 star ratings on all the major sites. I am looking forward to reading this one

‘THE CUCKOOS OF BATCH MAGNA’

When Sir Humphrey Miles Pinkerton Strange, 8th baronet and squire of the village of Batch Magna departs this world for the Upper House (as he had long vaguely thought of it, where God no doubt presides in ermine over a Heaven as reassuringly familiar as White’s or Boodle’s), what’s left of his estate passes, through the ancient law of entailment, to distant relative Humph, an amiable, overweight short-order cook from the Bronx.

Sir Humphrey Franklin T Strange, 9th baronet and squire of Batch Magna, as Humph now most remarkably finds himself to be, is persuaded by his Uncle Frank, a small time Wall Street broker with an eye on the big time, to make a killing by turning the sleepy backwater into a theme-park image of rural England – a vacation paradise for free-spending US millionaires.

But while the village pub and shop put out the Stars and Stripes in welcome, the tenants of the estate’s dilapidated houseboats are above any consideration of filthy lucre and stand their ground for tradition’s sake … and because they consider eviction notices not to be cricket.

Each disgruntled faction sees the other as the unwelcome cuckoo in the family nest.

So, led by randy pulp-crime writer Phineas Cook, and Lt-Commander James Cunningham DSO, DSC and Bar, RN (ret) – a man with a glass eye for each day of the week, painted with scenes from famous British naval victories and landscapes that speak of England – they hoist the Union Jack and battle pendant and prepare to engage. 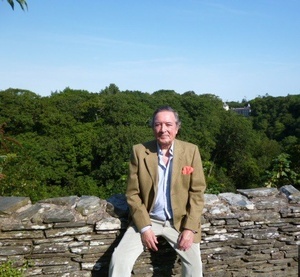 Peter Maughan is an ex-actor, fringe theatre director and script writer, married and living in the Welsh Marches, the borderland between England and Wales, and the backdrop to the Batch Magna novels, set in a village cut off from whatever the rest of the world gets up to beyond the hills of its valley.

After having had quite a few short stories and non-fiction writing about the English countryside published, a novel seemed to be the next logical step, so the Batch Magna series, was born out of nostalgia, of an idyllic time in the mid 1970’s ( the time frame for the books), spent heedlessly, gloriously free living in a small colony of houseboats, a bohemian outpost in a village on the River Medway in deepest rural Kent.

The summers, the youth and the river, was all there was, to this former houseboat dweller. Boating or swimming in it, or coming together for another ‘jolly’ on one of the moorings, for weekend lunches that ended up in the evening, and the parties that saw in yet another summer dawn. And the winters when the lamps were lit and the smell of log fires in the air, snug around the stove below when there was rain on the deck, or the owls in the wood across the river calling in the frosty dark.

Peter carried those memories of place and people around with him for years, until he moved to the Welsh Marches and found a home for them in a river valley there, in a place he called Batch Magna.

The houseboats from those days on the Medway were converted Thames sailing barges, however for his houseboats, on Batch Magna’s river, the ‘Cluny’, he used converted paddle steamers (once part of an equally fictional Victorian trading company, the Cluny Steamboat Company), because they too speak of fun and another time. And it seemed entirely right somehow that they should have ended up in quite dotty, amiable decline in Batch Magna.

The Batch Magna novels are feel-good books ‘The Wind in the Willows for grown-ups’, pure escapism – for me now, looking back, and I hope for my readers.

Actor, director, script writer, I am all of these when writing. I write the script, see the scene through the eye, as it were, of the camera and then act it out on paper.