Another couple of irresistible offerings from the NetGalley catalogue this week.

I was thoroughly intrigued by the synopsis for this first choice and I would love to hear from anyone who has read and reviewed the book, as the subject matter is clearly very topical and controversial and it would be good to get a cross section of views, before I get to read the book for myself … Please leave a link directly to your review in the comments box. Also, the author is a very illusive character, who seems to have no website and a very little used Twitter page, which gives nothing away, except for the meagre few lines I have featured below … even more interesting!

In a fast-paced, suspenseful debut novel for fans of Harlan Coben and Lisa Gardner, detective Darla Cavannah goes Deep South in pursuit of a merciless killer.

Outside the local women’s health clinic, the Reverend Jimmy Aldridge waving his protest sign is a familiar sight. But that changes early one morning when someone shoots the beloved Reverend Jimmy dead. Sheriff Shelby Mitchell knows the preacher’s murder will shock the good people of Jackson—and the pressure to find the killer is immediate and intense, which is why Shelby calls in detective Darla Cavannah.

When police detective Darla moved from Philadelphia to Jackson with her husband—hometown football hero Hugh “the Glue” Cavannah—she never imagined the culture shock that awaited. Then after Hugh dies in a car crash, Darla enters a self-imposed exile in her Mississippi home, taking a leave of absence from the sheriff’s department. Now she’s called back to duty—or coerced, more like it, with Shelby slathering on his good-ole-boy charm nice and thick, like on a helping of barbecue.

Reluctantly partnered with a mulish Elvis impersonator, Darla keeps a cool head even as the community demands an arrest. The court of public opinion has already convicted the clinic’s doctor, Stephen Nicoletti, but Darla is just as sure he’s not guilty—even as she fights her growing attraction to him. From the genteel suburbs to a raunchy strip club, Darla follows a trail of dirty money and nasty secrets—until the day of judgment comes, and she faces down an ungodly assassin. 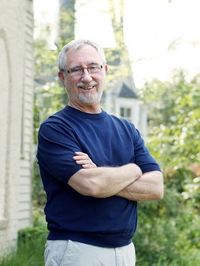 Gary Gusick is a retired advertising executive with over thirty years experience as a copywriter and creative director.

He is a multiple winner of virtually every national and international award for creative excellence in advertising.

‘The Last Clinic’ is his first novel.

Gary is married and lives in Jackson, Mississippi.

I probably should have back-tracked a little and started this series fom the beginning, when we are first introduced to Joe Bernardi. However, after reading the career history of the book’s author Peter Fischer, I really wanted to check out just where his writing talents had taken him, since the days of ‘Columbo’ and ‘Murder She Wrote’, shows I can remember watching only too well, here on UK television, as a teenager growing up.

‘PRAY FOR US SINNERS’

Joe finds himself in Quebec but it’s no vacation. Alfred Hitchcock is shooting a suspenseful thriller called “I Confess” and Montgomery Clift is playing a priest accused of murder. A marriage made in heaven? Hardly. They have been at loggerheads since Day One and to make matters worse their feud is spilling out into the newspapers. When vivacious Jeanne D’Arcy, the director of the Quebec Film Commission volunteers to help calm the troubled waters, Joe thinks his troubles are over but that was before Jean got into a violent spat with a former lover and suddenly found herself under arrest on a charge of first degree murder. Guilty or not guilty? Half the clues say she did it, the other half say she is being brilliantly framed. But by who? Fingers point to the crooked Gonsalvo brothers who have ties to the Buffalo mafia family and when Joe gets too close to the truth, someone tries to shut him up… permanently. With the Archbishop threatening to shut down the production in the wake of the scandal, Joe finds himself torn between two loyalties.

Peter S. Fischer is a prolific writer producer with over 25 years of experience in network television. Among his many credits is “Murder, She Wrote” which he co-created with the well-known television team of Richard Levinson and William Link. He was also involved for many years with “Columbo” starring Peter Falk, first as story editor and later as a producer. His writing credits include, among many others, “Marcus Welby,MD”, “Kojak”, “Baretta”, “Mac Millan and Wife”, and “Ellery Queen”. The latter was his first producing credit. I am sure that many of you will remember at least a couple of these popular shows and to check out Peter’s many other credits, click here…

In 2009, Peter came out of retirement to write two political thrillers, followed in 2011 by the first of ‘The Hollywood Murder Mysteries’ … ‘Pray For Us Sinners’ is book number 7 in the series, so as you can see, his writing now is as prolific as it ever was.