Up this week – Goodreads Giveaway competition win number eleven – Thanks to everyone involved, the storyline sounds great, I can’t wait to read more 🙂

‘THIS THING OF DARKNESS’

A security guard who tumbles off a cliff path on a windy night. A burglary where everything taken was returned by the thief. The suicide of a man in love with life.

An accident, a mystery, and unexplained tragedy. And nothing at all to connect them. Until, that is, Detective Constable Fiona Griffiths, searching for something – anything – to take her mind off the tedium of a routine assignment, starts to wonder if all three incidents are not quite what they seem.

It could just be her imagination. After all, she’d be the first to admit that she isn’t exactly in the prime of psychological health right now: the darkness she’s held at bay ever since she joined the police force now laps dangerously at her door. But something tells her there are invisible threads linking the crimes and, as she investigates further, she starts to see the outlines of a conspiracy so unlikely and on such a vast scale, that it takes her breath away.

And that’s when they come for her. 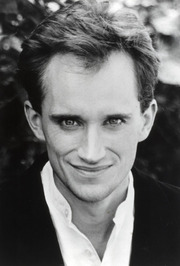 Harry Bingham, is a forty-something British author, married with children and living in Oxfordshire, UK.

He began his career as an investment banker, then turned to writing full time and now finds himself a critically acclaimed crime novelist, whose work has been published all round the world. He has also written fiction and non-fiction for a variety of major international publishers.

Harry created the Writers’ Workshop in 2005 by spending £800 on a website offering editorial services. He thought he might earn a little pin money on the side. Trouble was, people kept sending him manuscripts, rather more than he felt able to deal with. So he hired an editor to assist him. Then another, then another …

The WW is now the largest editorial consultancy in the UK. The Festival of Writing is the biggest and best writers’ conference in the UK, and Agent Hunter is the UK’s premier online literary agent search tool.

Harry is still very much involved with WW, but now also finds time to indulge in his hobbies of rock-climbing, walking and swimming.

I like the structure of the crime story, but most of all I like the ecosystem in which the genre flourishes: the festivals, the websites, the fans, the fact that you have your own special section of the bookshop. And crime is cool, too. It’s dark and edgy and funny and intelligent. I love it.

Harry does however, remain very pragmatic about the challenges of writing, whatever the genre

It’s a hard industry. Whether you’re conventionally published or indie or whether (like me) a mixture of the two, it’s a tough way to make a living. The simple truth is that most books don’t sell very many copies and most good books don’t sell very many either. That fact isn’t going to change – and the price of books isn’t suddenly going to skyrocket – so any writer just needs to accept that this is a hard way to earn a buck. My instinct is still to advise writers, if they can, do get a literary agent and get an advance from a regular publisher. Easier said than done!

Keep up with all the latest news at Harry’s website .. here