It probably seems as though you are being bombarded by posts from this book – and you are!

I generally come by books for review, after they have enjoyed their official release date, so when the opportunity to get a little ahead of the game comes along – well! what’s a girl to do?

I am also preparing the way for Thorne’s visit to Fiction Books on Thursday 19th February, when a guest post wraps things up from my end and marks the published release date for ‘Motherlove’ – So we both hope to see you then 🙂

So as not to show any spoilers I have not included a synopsis, however, if you want to find out more about the story, just click on the book image, or to read more about both book and author go here.

Kelly believed in Fate. She believed that there we were kindred spirits who belonged with each other and destiny would bring them together. Perhaps this was what had really brought her to Lyford. How likely was it that she’d find the missing girl? There’d been another response to the ad, a text from someone whose friend Carrie had been born on March 15th, but she’d emigrated to Australia and did Kelly want her address? That was all. That was all there was likely to be. Fate had brought her to Lyford, brought her here to Rick’s Place, where Ben was sitting at the bar.

She woke wanting to phone him, just to say hello. Was six o’clock too early? Probably! She would wait a while, but not here, not in this gloomy little room. In this house with its lace curtains keeping the daylight at bay. Breakfast was served from seven thirty, but did she want Mrs Hanshaw’s breakfast? Reconstituted orange juice, soggy cornflakes, rubbery white toast, burnt sausage and shrivelled bacon. Kelly had said she was a vegetarian but it made no difference. Ahmed, one of the remaining student lodgers, told her that four of her long-stay guests were Muslims and still they were served bacon and sausage. 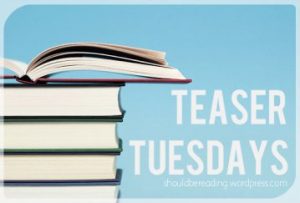 Teaser Tuesdays is a weekly bookish meme, hosted by … MizB of ‘Should Be Reading’.

It would be great if you then decided to leave a comment for MizB, as we all like to receive them and are interested in sharing your thoughts.

As this was a publisher review request, a complimentary paperback edition of, Motherlove, was sent to me by Honno Press.