‘Murder At The River Bend Retirement Resort’
By Stan Schatt 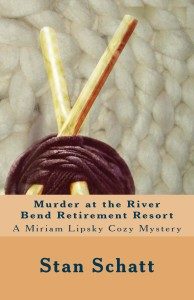 Returning from her early morning run, Miriam noticed the white paper because it stood out against her black painted mailbox. She stared at the folded piece of paper that someone must have left there after she picked up her mail the previous evening. At first she assumed it was a note from a realtor describing a home for sale in the neighbourhood and asking if she wanted to sell hers. She felt faint when she unfolded the paper and stared at the message. The writer had cut words as well as individual letters from a magazine and pasted them together into words that chilled her to the bone. She read over the message once again. She sensed the anger in the frighteningly crude language describing what he wanted to do to her and what he would force her to do to him. Her law enforcement classes as well as common sense told her a man and not a woman had written this, but who did she know who was even capable of it? She had never ever had a disagreement with anyone in town as far as she knew.

Read all about both book and author, here

Written by Yvonne
8 comments
‘No Substitute For Misinformation’
By Carolyn J. Rose
FacebookTwitter
‘If You Only Knew’ By Cynthia Clark