This is a meme for all you ‘Page Surfers’ out there! 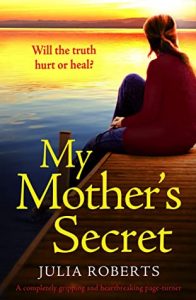 MY MOTHER’S SECRET by JULIA ROBERTS

“Mum didn’t make any excuses not to attend her appointment today, and as a consequence we’re very early for her 11.30 with Dr Ranjid. So early, in fact, that we have popped into the hospital cafeteria for coffee and cake. I’ve sat her down at a table near the window while I queue up to get served. It’s very different from the cosy hospital cafe at Beechmede where I’d sat chatting to Linda on Friday afternoon, but I suppose that’s because it’s at least four times the size.

I didn’t see Linda when I called in at Beechmede with my birth certificate during my lunchbreak yesterday. Grace photocopied it and then handed the original back to me saying she would forward my query about Jason to the records office. I went over in my mind what I’d originally said to Grace and was pretty sure I wasn’t landing Linda in trouble by being more specific about the information I wanted from them. All I really need to know is Jason’s case number and in what part of the extensive grounds he may have been buried. I no longer needed confirmation that my mum’s baby had never taken a breath. I also mentioned to Grace that Mum didn’t have long to live and how I hoped to show her where her baby was buried before she herself died. Grace didn’t make any promises, but I saw compassion in her eyes and knew she would do her very best to hurry things along”

If you still need to know more, here are the opening lines:-

And of course, the all important synopsis:-

So if you have a few moments, why not stop by and see what everyone is sharing this time, after all, you never know where that next great read is going to come from!