WHAT BOOK ARE YOU CURRENTLY READING?

The disillusioned Marine’s plan seems simple enough: steal a refrigerated tractor trailer loaded with frozen blood product; drive the pirated cargo from Reno, Nevada to the Port of Long Beach; collect a million dollars. Yet even the most deliberate plans can go sideways. On his campaign south, the Marine’s “inner idiot” takes charge, leaving a smattering of dead bodies in his wake.

In the dark before dawn, a telephone rings. Kern County Sheriff’s detective Lucas “Lucky” Dey, no stranger to being awakened with bad news, answers the call. But this time, the voice on the phone tells Lucky that his ill-fated younger brother has been gunned down on a blackened desolate highway.

As Lucky chases the former Marine and his black semi-rig into the bowels of Los Angeles, he’s thrust into a landscape of competing agendas. Conrad Ellis, the multi-millionaire entertainment mogul, demands justice for the murder of his starlet daughter. Ambitious federal attorney Lilly Zoller is determined to turn any opportunity into her personal spotlight. Rey Palomino, the morally-challenged contractor, colludes with the former Marine hoping to crawl out from under a crushing debt. LAPD detective and dedicated single mom Lydia “Gonzo” Gonzales, reluctantly accepts her assignment to “babysit” the unrestrained Kern County detective hell-bent on avenging his brother’s death at any cost.

A knee-breaking private detective, some unwitting feds, and a coterie of gang-busting L.A. Sheriffs deputies further complicate the scenario and round out the cast of characters in this explosive and unpredictable thrill ride.

WHAT BOOK DID YOU RECENTLY FINISH READING?

‘Dance The Moon Down’ by Robert Bartram

In 1910, no one believed there would ever be a war with Germany. Safe in her affluent middle-class life, the rumours held no significance for Victoria either. It was her father’s decision to enroll her at university that began to change all that. There she befriendes the rebellious and outspoken Beryl Whittaker, an emergent suffragette, but it is her love for Gerald Avery, a talented young poet from a neighbouring university that sets the seal on her future. After a clandestine romance, they marry in January 1914, but with the outbreak of the First World War, Gerald volunteeres but within months has gone missing in France. Convinced that he is still alive, Victoria’s initial attempts to discover what has become of him, implicate her in a murderous assault on Lord Kitchener resulting in her being interrogated as a spy, and later tempted to adultery. Now virtually destitute, Victoria is reduced to finding work as a common labourer on a run down farm, where she discovers a world of unimaginable ignorance and poverty. It is only her conviction that Gerald will some day return that sustains her through the dark days of hardship and privation as her life becomes a battle of faith against adversity.

WHAT BOOK DO YOU THINK YOU WILL READ NEXT?

‘Zaremba’ or Love and the Rule of Law by Michelle Granas

In Warsaw, a shy and high-minded polio victim lives a life of seclusion caring for her odd family until a chance encounter plunges her into the intrigues of dirty politics. Zaremba, a wealthy businessman, is about to be arrested on trumped-up charges and only she can save him. Swept along by events, Cordelia finds her feelings increasingly involved with a stranger for whom she is both rescuer and victim. When Zaremba disappears, Cordelia is painfully uncertain if she has been abandoned and must overcome surveillance, corruption, the media, and mounting humiliations and difficulties to learn the truth. Although set in Poland, this is a story that could happen anyplace, as young democracies struggle against the temptations of covert operations and older democracies sometimes lead them astray. Upbeat, humorous and serious by turns, Zaremba contains an intense but delicate romance, a universal moral about the abuse of power, and a vivid portrayal of a foreign country.

WHAT WAS THE LAST BOOK YOU REVIEWED?

‘Dreaming, Not Sleeping’ A Short Story By Julia Kavan 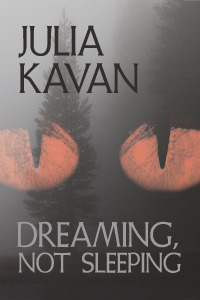 Her nightmares were simply too good to resist.

A woman is tempted away from the safety of her husband’s arms by a skillful nighttime visitor.

But they both find nothing is what it seems…

Read my thoughts about this story, here…

WHAT BOOK REVIEW ARE YOU WORKING ON NOW?

Instead, he receives a cryptic postcard from a man he’s never met, gets wrapped up in an elaborate art heist and finds himself framed for murder.

And what’s worse, his future in-laws are in town!

The palette is certainly thickening here, and there might be only one person who can rally the muses in time to string it all together: the Master himself, Enescu Fleet, retired private eye.

Stop by and leave a link to your own reading schedule, I can’t wait to visit and check them all out!