This is the first time I have taken part and as I probably won’t be able to contribute every week, I have taken the liberty of adding in a couple more W…’s, which came to mind.

I am only a short way into this book, however immediately, the first lines had me needing to know more.

What did you recently finsh reading?

My last book was ‘The Dragondain’ by Richard Due. This was the sequel to ‘The Moon Coin’ and the second book in ‘The Moon Realm’ series, a fantasy saga, which although written for the YA reader, can be equally enjoyed and marvelled at by adults.

One thing’s for sure: now that Lily and Jasper have entered the Moon Realm, nothing can ever be the same again.

Next up, is ‘Until There Was You’, a book which was a competition win and a copy of which was sent to me as a Kindle download by its author, Jessica Scott.

A by-the-book captain with a West Point background, Captain Evan Loehr refuses to mix business with pleasure—except for an unguarded instance years ago when he succumbed to the deep sensuality of redheaded beauty Claire Montoya. From that moment on, though, Evan has been at odds with her, through two deployments to Iraq and back again. But when he is asked to train a team prepping for combat alongside Claire, battle-worn Evan is in for the fight of his life.

Strong, gutsy, and loyal, Captain Claire Montoya has worked hard to earn the rank on her chest. In Evan, Claire sees a rigid officer who puts the rules before everything else—including his people. When the mission forces them together, Claire soon discovers that there is more to Evan than meets the eye. He’s more than the rank on his chest; he’s a man with dark secrets and deep longings. For all their differences, Evan and Claire share two crucial passions: their country and each other.

What was your last review to be published?

My last published review was of ‘Transported’, a book from my own shelves and one which was a charity shop purchase by me. This book definitely falls into the realms of YA fiction and would make a great addition to any school curriculum, in the many countries in which the series is available.

What will be your next review to be published?

Next up will be a great contemporary fiction book, ‘Olive Branches Don’t Grow On Trees’ by Grace Mattioli. It is a story of family feuding and hsotilities and one person’s aim to bring about a peaceful and lasting truce!

Imagine you are asked to plan a gathering for a feuding family of six that has not been gathered together in over six years. Add to this the fact that the parents of this family are newly separated and that your own life is falling apart. This is the challenge that befalls twenty-three year old Silvia Greco when she is drafted into helping her mother plan a party for her younger brother’s high school graduation. She takes it on, and in doing so, must negotiate with each member of her family, appealing to their individual needs and interests, in order to get them to go. Through this process, she learns that peace is not something that is easily achieved or freely existing. It is something that needs to be created, cultivated and nurtured. In other words, she learns that “olive branches don’t grow on trees.” 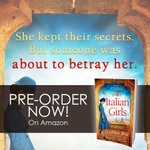 On a #99p/c UK/US kindle deal!
An accident. An offer of help.
And baby Erin was gone...
"I could hardly put it down to go to bed."
http://getbook.at/StolenSister #KindleUnlimited #suspense #kindledeals #mystery 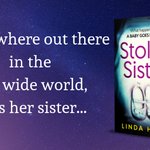