I came across this tiny, pocket sized book, in the charity shop where I volunteer and I just couldn’t resist buying it.

I am not much of an adventurous cook, so the fact that the recipes don’t have any pictures, doesn’t really worry me. It was the unique combination of recipes and ‘baking’ quotes, which had me intrigued.

Nothing seems to please a fly so much as to be taken for a currant, and if it can be baked in a cake and palmed off on the unwary, it dies happy ….. Mark Twain

I hope to be able to share some of the traditional and slightly quirky quotes, in my posts over the coming weeks and to start things off, I found a recipe to share with you, which represents my home County (State) of Somerset, UK.

Mention Somerset and the first thing almost anyone in the country would say, is ‘cider’. Not just the new designer varieties which come packaged in smart looking bottles, but the traditional ‘rough’ cider bought direct from the farm in gallon containers and strong enough to blow your head off! So it comes as no surprise that my recipe this week, will be of the slightly ‘boozy’ variety!

So whether you’re a bread boffin or a pastry pundit, put on your apron, dig out the mixing bowl and start the oven, because it’s time to go baking mad. Here’s a book packed with recipes and quotations that will sweeten your day as you bake your country proud. 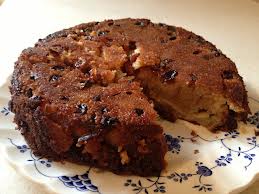 Grease a 20 cm / 8 in easy-release or springform cake tin.

Boil the cider in a small pan over a medium heat until reduced by two-thirds.

In a large bowl, beat together the sugar and butter until light and fluffy.

Add the grated apple, eggs and cider and stir well.

In a separate bowl, sift the flour and add the baking soda, mixed spice, cinnamon and nutmeg.

Stir well, then pour in the cider and apple mixture.

Fold in the sultanas and pecans, and stir.

Transfer to the cake tin and bake for 50-60 minutes.

Talking about all things cider and quirky, another of the most famous, or maybe infamous, of Somerset’s (Zummerzet) exports, has to be ‘The Wurzels’. A band of strangely dressed men, with odd looking instruments, who leapt onto the stage at the ‘Royal Oak Inn’, in Nailsea, Somerset, in December 1966 and proceeded to record a ‘live’ album for the EMI record company. On that day, ‘Wurzelmania’ hit the UK and Adge Cutler & The Wurzels started a musical revolution with their hit single ‘I Am A Cider Drinker’, which is still going strong to this day, despite the sudden passing of Adge, the ‘King Of Scrumpy & Western Music’, in 1974.

Adge was a Somerset man, who knew his homeland, its characters and their foibles. The wit of his lyrics encouraged Somerset folk to laugh at themselves. He was that rare bird – a born entertainer, who was just slightly bemused to the end, that his quirky little sing-along songs, extolling the virtues  of living in the land of cider and sunshine, had brought so much pleasure, to so many people.

…. and what is literature compared with cooking? One is shadow and the other is substance ….. E.V. Lucas, English humorist, essayist, playwright, biographer and publisher.

I am looking forward to sharing all your great ‘foodie’ offerings this week and I hope that you all have a great weekend.