It seems like such an age since I last participated in this meme. I simply haven’t come across any of those rare gems of new to me words in my recent reading.

This time, I shall be sharing random words from a selection of books, some of which the US followers may already know of, but which to me, are completely new.

1. – My first words this time, were taken from North Of Supposed To Be by Marcia Ferguson

After the nurse left, Bronwyn delicately shifted her position in the naugahyde chair with its brass studs, knowing that once she managed to get in the chair, she’d be staying there a while.

NAUGAHYDE – Is an American brand of artificial leather (or “pleather” from plastic leather). Naugahyde is a composite of a knit fabric backing and expanded polyvinyl chloride (PVC) plastic coating. It was developed by United States Rubber Company, and is now manufactured and sold by Uniroyal Engineered Products, LLC, a privately held company.

Its name, first used as a trademark in 1936, comes from the Borough of Naugatuck, Connecticut, where it was first produced. It is now manufactured in Stoughton, Wisconsin. 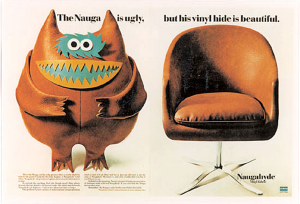 A marketing campaign of the 1960s and 1970s asserted humorously that Naugahyde was obtained from the skin of an animal called a “Nauga”. The claim became an urban myth. The campaign emphasized that, unlike other animals, which must typically be slaughtered to obtain their hides, Naugas can shed their skin without harm to themselves. The Nauga doll, a squat, horned monster with a wide toothy grin, became popular in the 1960s and is still sold today.

I guess our UK equivalent of naugahyde, would be leatherette.

2. – Also from North Of Supposed to Be

Bronwyn described the triumvirate she called ‘The Boys’

TRIUMVIRATE – From Latin, triumvirātus, from trēs three + vir man, is a political regime dominated by three powerful individuals, each a triumvir (pl. triumviri). The arrangement can be formal or informal, and though the three are usually equal on paper, in reality this is rarely the case. The term can also be used to describe a state with three different military leaders who all claim to be the sole leader.

3. – And my final word from North Of Supposed to Be

She was reading a newspaper story about Mayor Luke Townsend touted as the early front runner in gubernatorial polls.

GUBERNATORIAL – A governor is, in most cases, an individual public official with the power to govern the executive branch of a non-sovereign or sub-national level of government, ranking under the head of state. The adjective pertaining to a governor is gubernatorial, from the Latin root gubernare. The historical female form is governess, though female officials are referred to by the gender-neutral form governor (without the gender specific suffix) of the noun to avoid confusion with other meanings of the term.

4. – My final word this time, comes from our hosts own website and comprised part of her ‘Mailbox Monday’ meme this week, where she featured the book Won Ton and Chopstick..

A Cat And Dog Tale Told In Haiku

A HAIKU in English is a very short poem in the English language, following to a greater or lesser extent the form and style of the Japanese haiku. A typical haiku is a three-line quirky observation about a fleeting moment involving nature.

The first haiku written in English date from the early 20th century, influenced by English translations of traditional Japanese haiku, and the form has grown in popularity ever since. Many well-known English-language poets have written some haiku, though – perhaps because of their brevity – they are not often considered an important part of their work. Haiku has also proven popular among amateur writers, and additionally in schools, as a way to encourage the appreciation and writing of poetry.

… Is a weekly meme where we share new (to us) words that we have encountered in our reading. It is hosted by Kathy, over at ‘BermudaOnion’s Weblog’.You can either stop by and leave a link to your own ‘mystery’ words of the week, or just browse the eclectic mix of words that others have discovered, there is always a great selection.