1. – My first word this time, I came across whilst editing a promotional post for a new book which had arrived in my mailbox. The author, Roy A. Teel, Jr. had such a heartbreaking, yet heartwarming personal story to tell, that I found myself reading his biography with rapt attention to the detail.

In 2013, Roy released his first novel, ‘And God Laughed’, a neoplatonic dialogue between one man and God. Although now a secular humanist, Roy believes in God but rejects all religions as man’s folly and wrote a fictional narrative about a relationship with God outside of religion.

NEOPLATONIC – Neoplatonism (or Neo-Platonism) is a modern term used to designate a tradition of philosophy that arose in the 3rd century AD and persisted until shortly after the closing of the Platonic Academy in Athens in AD 529 by Justinian I. Neoplatonists were heavily influenced both by Plato and by the Platonic tradition that thrived during the six centuries which separated the first of the Neoplatonists from Plato.

Collectively, the Neoplatonists constituted a continuous tradition of philosophers which began with Plotinus. In defining the term, it is difficult to reduce Neoplatonism to a concise set of ideas that all Neoplatonic philosophers shared in common.

2. – My second word this time, I discovered when I stopped by the site of fellow blogger, Elizabeth, to comment on her entry for a regular meme in which we both participate. She was sharing the first lines of the current book she was reading and whilst I could pretty much work out the general context in which this word was being used, I felt sure that it had a unique definition, all its own … and it did!

Brother Wulfstan checked the color of his patient’s eyes, tasted his sweat. The physick had only weakened the man. The Infirmarian feared he might lose this pilgrim. Trembling with disapointment, Wulfstan sat himself down at his worktable to think through the problem.

INFIRMARIAN – A person dwelling in, or having charge of, an infirmary, especially in a monastic institution.

3. – And finally this time, a word from one of the best psychological thrillers I have read for a long time – ‘Hidden’, by Emma Kavanagh.

She was a year into her PhD, quietly wondering what the hell had inspired her to select the study of prosopagnosia for a subject, was in the student bar waiting for Mara, as she always seemed to be, when the news had flashed on.

PROSOPAGNOSIA – Prosopagnosia (also known as ‘face blindness’) refers to a severe deficit in recognizing familiar people from their face. While some people report a very selective impairment that only influences the recognition of faces, others find the deficit extends to the recognition of other stimuli, such as objects, cars, or animals. Many people also report deficits in other aspects of face processing, such as judging age or gender, recognising certain emotional expressions, or following the direction of a person’s eye gaze. Finally, a substantial proportion of prosopagnosics report navigational difficulties.

Tagged asNew To Me Words I Have DiscoveredWeekly MemeWondrous Words Wednesday

Hannah’s returning to Luckett Quay will it help to mend her broken heart.... 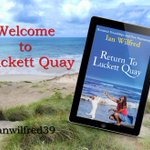