New words have been a little thin on the ground over the past few weeks, but here is a short selection I have been saving up …

1. – As part of my role as the book co-ordinator in the charity shop where I volunteer, I am also responsible for researching any possible hidden gems amongst the antiquarian books which we receive as donations. This first word was in fact the title of an elderly and rather battered copy of a 1953 novel. Having no idea what the word meant or what it might have described, I made it my mission to find out, although sadly the book was confined to the recycling pile ..

‘TOO LATE THE PHALAROPE’

A phalarope or wadepiper is any of three living species of slender-necked shorebirds in the genus Phalaropus of the bird family Scolopacidae. They are close relatives of the shanks and tattlers, the Actitis and Terek sandpipers, and also of the turnstones and calidrids. They are especially notable for two things: their unusual nesting behavior, and their unique feeding technique.

Two species, the red phalarope (Phalaropus fulicarius, called grey phalarope in Europe) and red-necked phalarope (P. lobatus) breed around the Arctic Circle and winter on tropical oceans. Wilson’s phalarope (P. tricolor) breeds in western North America and migrates to South America. All are 6–10 in (15–25 cm) in length, with lobed toes and a straight, slender bill. Predominantly grey and white in winter, their plumage develops reddish markings in summer.

2. – This next word, I heard when watching the Channel 4 television news, where William Woodard, (Will) Self (born 26 September 1961) an English novelist, journalist, political commentator and television personality, was chatting about current domestic political matters, with the newsreader. Will is a skilled orator and raconteur, always guaranteed to provide plenty of new to me words for a WWW post! 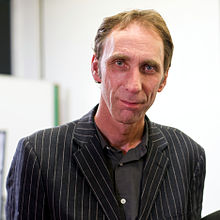 The technical term for double vision.

3. – Now a word discovered in yet another news item, this time courtesy of an article run by our local Somerset BBC station. If you can stand to watch and listen, click on the link 🙂

BOLVING – Bolving is the name given to the stags roar when it is rutting and the stags do a series of deep guttural sounds from one breath repeated many times. The term bolving is localised to Exmoor meaning exactly the same as roaring.