One or more of my words this week, may be well-known to many of my fellow bloggers. However, all the words are new to me and particularly caught my attention in my recent reading and blogging activities.

1. – My first word this time, I found across at ‘Musings Of A Bookish Kitty’ , when the lovely Wendy combined her review of this book, with a feature in one of her regular memes. The word is in the book title and whilst Wendy does explain its meaning as part of her review, I found myself intrigued as to whether there was a more comprehensive explanation for the word.

We meet him late in life: a quiet man, a good father and husband, a fixture in his Brooklyn neighborhood, a landlord and barber with a terrifying scar across his face. As the book unfolds, moving seamlessly between Haiti in the 1960s and New York City today, we enter the lives of those around him, and learn that he has also kept a vital, dangerous secret. Edwidge Danticat’s brilliant exploration of the “dew breaker” –or torturer — is an unforgettable story of love, remorse, and hope; of personal and political rebellions; and of the compromises we make to move beyond the most intimate brushes with history. It firmly establishes her as one of America’s most essential writers.

The Dew Breaker is a novel by Edwidge Danticat, published in 2004. The title “comes from a Creole phrase which refers to those who break the serenity of the grass in the morning dew. It is a Creole nickname for torturer.” In this case, the “Dew Breakers” are members of the Tonton Macoutes, a group of volunteers who tortured and killed thousands of civilians under the regimes of François and Jean-Claude Duvalier in Haiti.

2. – Next up this time, is a word I first discovered some time ago, in the synopsis of a book I was featuring in one of my regular memes. Having updated my WordPress since then, I recently decided to tidy up as many of the original posts as possible, catch up with reading some of the books I had featured, but then consigned back the the bookshelves and finally to get a few more reviews posted to Amazon and Goodreads.

They are on the verge of becoming the oldest surviving craniopagus twins in history, but the question of whether they’ll live to celebrate their thirtieth birthday is suddenly impossible to answer.

3. – Finally this time, another word featured by a fellow blogger, this time the lovely Kelly, over at ‘Kelly’s Thoughts & Ramblings’. Kelly quite often features recipes on her site, either her own personal favourites, or those she is trying for the first time and as a confirmed non-baker, I am constantly amazed at some of the delicious looking results of her efforts 🙂 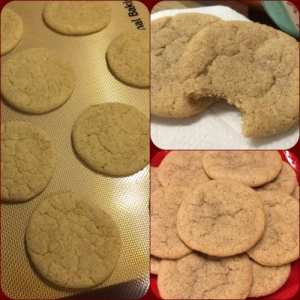 A type of cookie made with butter or oil, sugar, and flour, and rolled in cinnamon sugar. Eggs may also sometimes be used as an ingredient, with cream of tartar and baking soda added to leaven the dough. Snickerdoodles are characterized by a cracked surface and can be crisp or soft depending on preference.