I’m a little late with my contribution this week, so just a couple of quick words, which have once again come from ‘The Shadow Cartel’ by Layton Green.

Layton’s writing is always good for plenty of ‘new to me’ words, as well as some excellent 5 star ratings and ‘The Shadow Cartel’ is heading straight for that list, unless the grand finale really lets the story down … but I know that just isn’t going to happen!

“Some type of sink hole?” Grey asked. “Cenote,” Fred said. “The Yucatan is a big piece of limestone Swiss cheese.” 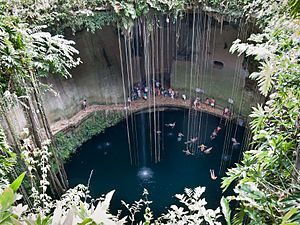 A cenote (pronunciation: American Spanish: , /sᵻˈnoʊti/ or /sɛˈnoʊteɪ/) is a natural pit, or sinkhole, resulting from the collapse of limestone bedrock that exposes groundwater underneath. Especially associated with the Yucatán Peninsula of Mexico, cenotes were sometimes used by the ancient Maya for sacrificial offerings.

The term derives from a word used by the low-land Yucatec Maya — ts’onot — to refer to any location with accessible groundwater. Cenotes are common geological forms in low latitude regions, particularly on islands, coastlines, and platforms with young post-Paleozoic limestones that have little soil development.

They were told there were plenty of villagers who still worshipped in the old ways, and that religion in the highlands was a syncretism of ancient beliefs and Catholicism.

The merging of different inflectional varieties of a word during the development of a language.