I haven’t taken part in Wondrous Words Wednesday for some weeks now, as I simply haven’t come across any new to me words, to share with you all!

I stumbled upon these words quite by accident and within the space of a couple of days and I have enjoyed myself researching them, after this fallow period.

A grief-stricken candy-striper serving in a VA hospital following her brother’s death in Viet Nam struggles to return home an anonymous veteran of the Great War against the skullduggery of a congressman who not only controls the hospital as part of his small-town fiefdom but knows the name of her veteran. A name if revealed would end his political ambitions and his fifty-year marriage. In its retelling of Odysseus’ journey, Revenants casts a flickering candle upon the charon toll exacted not only from the families of those who fail to return home but of those who do.

A revenant is a visible ghost or animated corpse that is believed to have returned from the grave to terrorize the living. The word revenant is derived from the Latin word reveniens, “returning” (see also the related French verb revenir, meaning “to come back”).

In ancient times a coin, known as Charon’s toll, was often placed in the mouth of a corpse prior to burial as payment to Charon, to ensure the deceased was seen safely into the underworld. Some authors say that those who could not pay the fee, or those whose bodies were left unburied, had to wander the shores for one hundred years.

This word I heard quite randomly and unexpectedly, whilst we were watching an evening edition of one of the national news programmes. Our politics, like most other places in the World, is in a state of turmoil and flux right now. Our government opposition party, Labour, faces the even more challenging prospect of a split within its ranks, possibly rendering them impotent and no longer fit for purpose as a counter balance to the incumbent Conservative party government.

“THE BATTLE FOR THE LABOUR PARTY” – Channel 4 Dispatches 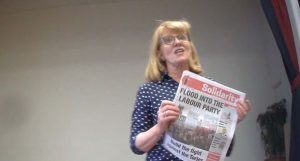 Mr Lansman said: “Momentum and the Campaign are not coterminous…” He denied that the relationship is “covert or not transparent”. He said the phonebank organisation “was for the campaign, not Momentum.”