My first word this time, is actually from the title of a review book I have in my reading pile right now. At first I didn’t think about the word as having any specific definition, however something made me check it out and sure enough – another new to me word right in front of me.

Ghost Maven is the first in a series of Young Adult novels featuring Alice Parker, a 16 year old girl who discovers she has the power to slay ghosts.

Is a trusted expert in a particular field, who seeks to pass knowledge on to others. The word maven comes from Hebrew, meaning “one who understands”, based on an accumulation of knowledge.

This word I came across on the pages of ‘The Bookworm’, where the lovely Naida is a fellow crafter and one of my blogging friends.

Crocheted mandalas are having a moment! And it’s no wonder the lovely mandala is in vogue: one evening is often enough to begin and finish something eye-catching. Many crocheters make mandalas as a meditative activity, while others love them simply for the wonderful opportunities they offer for mixing colors and stitch textures. A new take on traditional shapes, like granny squares or hexagons, these attractive crocheted circles are causing a real buzz in the crochet community.

A circular figure representing the universe in Hindu and Buddhist symbolism. In Hinduism and Buddhism, mandalas have a ritual role, representing Buddha or even the universe. The different parts of such a mandala have a symbolic meaning. For instance, the outer circle often symbolizes wisdom in Buddhism.

This next word, I discovered whilst taking part in one of my regular Friday memes, ‘Book Beginnings On Friday’. Maria, blog owner of ‘Queen Of All She Reads‘, posted lines from a book and series she was obviously enjoying greatly and whilst it transpires that this word is in everyday usage in the U.S., here in the UK it simply isn’t the same, so this reference is probably just for the benefit of my English blogging pals?

My Thoughts: I have been glomming on this series since I started it last week and have already finished this book. “Sam” did something in book 9 – which I frankly applauded – that got her in trouble with the Chief and now she’s facing the consequences. She’s also totally in denial about being okay with someone else being in charge – she is a true Type A personality female.

To grab or hold onto something

To understand or realize

And finally, this word I discovered during a recent visit to Lacock Abbey in Wiltshire. We stop by the village quite often, as we are National Trust members and it is such a great venue. In fact it is one of the most visited places in the UK by overseas visitors and parts of the Abbey itself have been used as a location in TV and film productions of Wolfman, Pride and Prejudice, Cranford Chronicles, Emma and Harry Potter films. 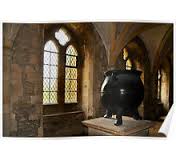 This must have been a very popular place with the nuns, as it was the only room they used which had a fire. Another name for it is the calefactory.

The room or building in a monastery holding its communal fire, kept warm and used as a sitting room.

A warming pan, or similar device used by a priest to warm his hands.