It has been an absolute age since I last took part in this lovely meme, so long in fact, that I had to check first that Kathy was indeed still hosting each week!

In truth, I haven’t come across too many words to share just recently. However I have been saving up not only those few which are new to me, but also some which just seemed so obvious I needed to check to make certain they actually existed!

1. EXSANGUINATION Let’s get the ball rolling with this word I came across whilst reading ‘A Sinner’s Gift’ by Zoe Beesley. A great read, my review here

Exsanguination. Blood pours from the body until the volume and pressure is reduced to a fatal level, to death and a bloody great mess.

EXSANGUINATION – Is the loss of blood to a degree sufficient to cause death.

2. MIXOLOGIST I am ashamed to say that I didn’t make a note of which blog I was visiting when I spotted this word, so if you happen to stop by today, whoever you are, please accept my apologies. This is one of those words which sounded just too simple and obvious to be real, so I had to check it out! 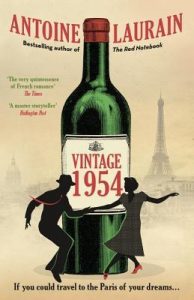 When Hubert Larnaudie invites some fellow residents of his Parisian apartment building to drink an exceptional bottle of 1954 Beaujolais, he has no idea of its special properties.

The following morning, Hubert finds himself waking up in 1950s Paris, as do antique restorer Magalie, mixologist Julien, and Airbnb tenant Bob from Milwaukee, who’s on his first trip to Europe. After their initial shock, the city of Edith Piaf and An American in Paris begins to work its charm on them. The four delight in getting to know the French capital during this iconic period, whilst also playing with the possibilities that time travel allows. But, ultimately, they need to work out how to get back to 2017, and time is of the essence

MIXOLOGIST – A person who is skilled at mixing cocktails and other drinks.

Both of these last couple of words are taken from the latest book written by Layton Green, one of my favourite authors. As usual it was a 5 star read and my review will be published shortly.

Yet time and entropy, the dirty uncles of poverty, had taken their toll.

Funny how terrified we are of inchoate things when our reality is far more desperate.

ENTROPY – Lack of order or predictability; gradual decline into disorder.

Can also mean – A thermodynamic quantity representing the unavailability of a system’s thermal energy for conversion into mechanical work, often interpreted as the degree of disorder or randomness in the system.

INCHOATE – Just begun and so not fully formed or developed; rudimentary.

Can also mean – An inchoate offense, preliminary crime, inchoate crime or incomplete crime is a crime of preparing for or seeking to commit another crime.